You are here: Home » Do I smell cheese? Dipcadi in Gran Canaria

I have always been slightly puzzled about the lack of bulbous plants in the Canaries. It may be because bulbs often have rather heavy seeds and they simply did not reach these islands from the mainland. Maybe it is because the volcanic and shifting soils do not suit them even though I would have thought that the climate would be fine for many bulbs.

So, on a trip up the relatively quiet western coast of Gran Canaria, on the quest to get a photo of pericallis (which always eludes me) I was pleased to discover a bulb in bloom. It was growing by the side of the road in the windiest place imaginable on a cold (6c) damp (it was raining) day. 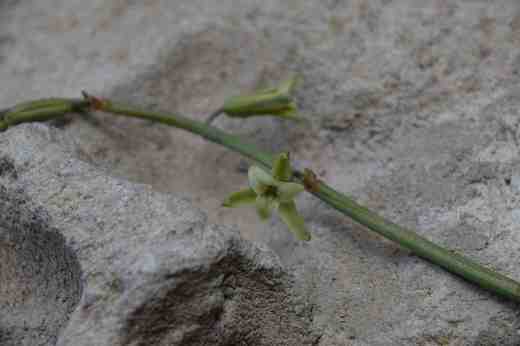 I was puzzled at what it was and the first name that entered my head was dipcadi but I wasn’t confident that this African genus was found here. The flowers were only about 1cm across and although dull in colour they were interestingly shaped with the inner tepals shorter and broader than the outer and, dare I say it, less green and more attractive! This colouration does suggest that it is not going to be attractive to bees and as if to reinforce my thoughts that it may rely on flies or beetles to pollinate it, the flowers had a smell rather like cheese – and not the sort you would put in your sandwich either but the most rustic cheese you can think of.

After some research I think this is a dipcadi and it may be Dipcadi serotinum because this is found on the island even though that is supposed to be scentless and have flowers tinged or shaded brown. I am not sure. Does anyone know? 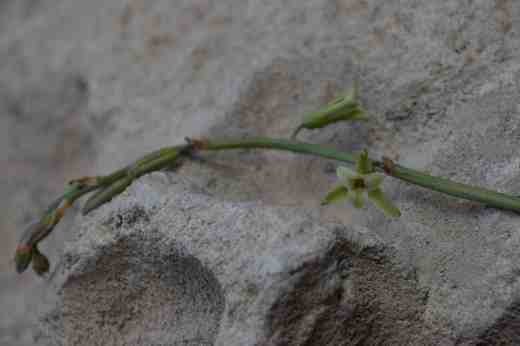