You are here: Home » Birds of paradise and cheeky finches

When it comes to recognising and naming flowers, the bird of paradise or Strelitzia reginae must come at the top of the list together with daffodils, clematis and poppies. It is very much ‘the flower’ of the Canary islands and you can easily buy bunches at the airport to bring home although it is actually a native to South Africa. It is such a tough plant and so easy to grow, though slow from seed as many gardeners have found out the hard way, that it features in many gardens and public plantings all around the world where the climate is more or less free of frost.

Closely related to the ravenala featured the other day, the flowers are fascinating and have a double-link to birds. Most people recognise the bird link because of the obvious visual likeness of the flowers to a bird’s head, maybe most obvious in the crested crane rather than a bird of paradise.

But even if the flowers did not look vaguely avian there is the fact that the flowers are pollinated by birds. As pollinators, birds do have some advantages for plants. They can fly long distances and carry pollen to other plants to cross pollinate and they can be used to distribute seeds too. But they are not very interested in pollen, unlike most insects, and they are big and rough and can rip flowers to shreds. But they do like nectar and the classic pollinators are humming birds which sip nectar from deep in the blooms. Birds can see red, unlike insects, so bird-pollinated flowers are often red or brightly coloured and because birds do not have much of a sense of smell bird-pollinated flowers usually have little fragrance.

Strelitzias are not scented and they do produce copious nectar – so much that it often drips from the flowers – but unlike most, the pollen is not transferred from one bloom to another on the bird’s head but on their feet.

The flowers emerge from the horizontal spath, with orange petals for display and blue ones around the two stamens. As the bird lands on the blue petals they open to reveal masses of pollen which is collected on the feet as the bird probes the base for nectar. At the far end is the stigma where pollen is collected.

Although S. reginae is the most common species, there are five in total. Although it has smaller flowers, S. juncea, (below) which has petioles with no leaf blade at the end, is a charming alternative and smaller in size and maybe better for pot culture.

Much bigger and bulkier is S. nicolai. While S. reginae is stemless (well above ground) this one forms thickets of upright stems to 5m high and is a bit of a monster. The flowers are just as big but because the flowers are comprised of more bracts that emerge from another the inflorescence can look a bit scruffy. It is definitely one for frost-free gardens where there is room and the more delicate colour scheme is pretty. 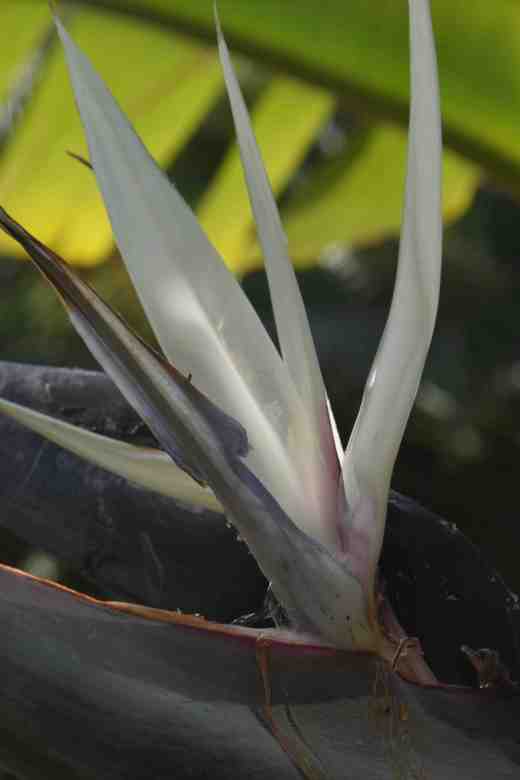 As if to prove that birds like red flowers, I saw some finches in the hotel gardens having a mid-morning snack on a calliandra tree. I am not sure which calliandra this is – they are all lovely with their powder-puff blooms – (it could be C. tweediei) but the local finches were fluttering from one flower cluster to another pushing their beaks into the base of the stamens for a welcome drink. 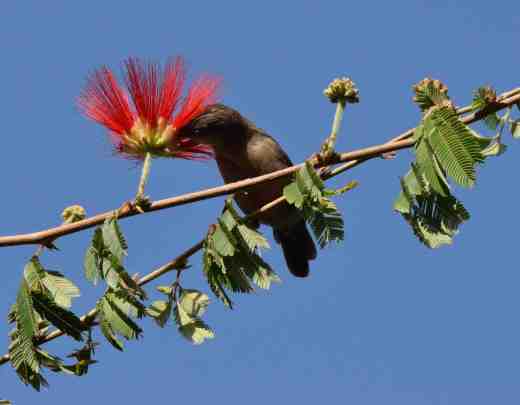 They have obviously discovered this for themselves since the plant is noyt native and they don’t have nectar-feeding beaks. They were well-behaved and didn’t damage the flowers.

3 Comments on “Birds of paradise and cheeky finches”