You are here: Home » Pret a planter

You will be relieved to know that I did not just buy weird plants while we were on our travels. I am very fond of crocosmias, something that may be odd here in Ireland where the common montbretia is naturalised everywhere. The popular ‘Lucifer’ is widespread and no worse for that, though I am sure that many clumps are imposters since it comes true (or almost so) from seed. I brought back just two, since I had to balance my purchases. Above is ‘Golden Dew’ which is a mid-sized plant with slightly bronzed leaves and golden yellow flowers. It screamed at me to take it home and I fell for its large, flat, bright flowers. To balance that I also bought ‘Culzean Pink’ (or Peach) which is more subtle, with its tubular flowers held more horizontally. They are a curious salmon pink, unusual in the genus. BTW, it is pronounced ‘kew-lane’.

Crocosmias like sun and are hardy, though they do prefer a rich soil and plenty of water in summer. The new garden has little shade and is windy so buying plants for shade would be foolish until the trees grow a fair bit bigger than they are now. So it was madness to buy Cauttleya robusta. This hardy ginger likes a moist, humus-rich soil and part shade. Like all its clan it can be very late to emerge in spring but then makes exotic clumps of beautiful pleated leaves and tubular golden flowers from dark red bracts. 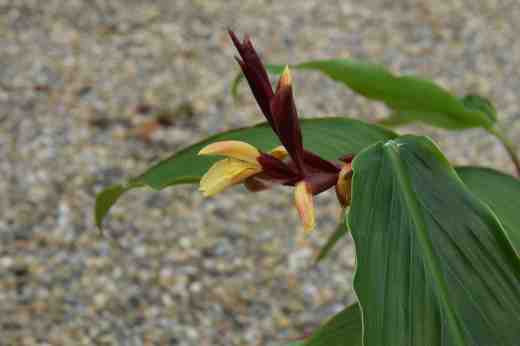 At Picton Castle gardens I also bought several salvias, not all of which have flowers yet so I will restrict this post to just one. Salvia ‘Phyllis’ Fancy’ is a hybrid of S. leucantha that arose at the University of California Santa Cruz Arboretum and was named after a garden volunteer, Phyllis Norris. It is potentially a very long-flowering, shrubby plant but is not completely hardy. It is supposed to be hardy at the roots so may act as a herbaceous plant. I have already stripped it for cuttings – it pays to have lots of plants so you can experiment.

And of course some more oddities, this time from Urban Jungle, specialists in exotics in Norfolk. The visit was almost a disaster since a power cable came down in the storm soon after we arrived and their tills were not working! They kindly allowed me to take plants and phone with payment the next day. It was good of them but also meant I could buy more since I had little cash!

I bought three pseudopanax. These shrubby plants from New Zealand are quite odd and P. ferox (Left) and P. crassifolius (right) have distinct juvenile foliage that is tough, spiny and narrow. Only when mature do plants develop foliage like the plant in the foreground. It is thought this was an evolutionary development to prevent browsing by the now extinct Moas – giant flightless birds. Ironically, the plant in the foreground is ‘Moa’s Toes’, named after the shape of the leaves which are the same shape as … I think you get the idea. These pseudopanax need good light and perfect drainage. They are borderline hardy, best in a sheltered spot, but ideal for coastal gardens. These will stay in the polytunnel until I get the perfect spot and the soil well conditioned for them.

2 Comments on “Pret a planter”

My garden
My garden
botany, Plants
Sweetgum and Pines