You are here: Home » A rose by any other name 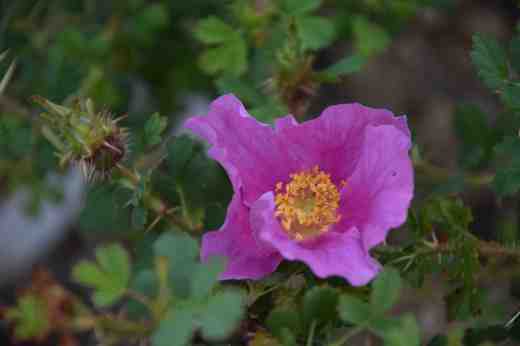 When I planted the roses in the new garden I started the list with those I just had to have and, at the end, added some I didn’t know, just for fun. One of these was the gooseberry rose Rosa stellata var. mirifica.

Stellata means starry and mirifica means amazing or wonderful. So there is obviously something about this rose that makes it worth growing.

When it arrived (bare root) it was a very thorny and bushy plant with masses of thin branches and I must admit that I didn’t prune it as hard as the others at planting time. This was partly because I was a bit thrown by its habit but also because I knew that if I pruned it hard I would not get any flowers this summer and I was keen to see what the flowers were like – naughty, but difficult to resist. I almost paid for my impatience because for a while it did not look very well and was slow to sprout. But it is now very healthy and the first flower has opened.

This is a very strange rose. It has typical rose flowers, with five petals (not all have five – some have four) with yellow anthers and there is a slight fragrance (some wild species are completely scentless). But there the typical rose look ends because although there are prickles, they are not flattened and curved like most but narrow, needle-like and straight. Along with the longer prickles there are countless small ones all over the plant, including the sepals. The leaves are odd too, with three (to five) leaflets and they are dull green and very small. They really do make the plant  look more like a gooseberry than a rose. They have also been compared to potentilla leaves, another genus in the rose family. It seems to be a rose made up with spare bits from other genera in the rose family!

Although I won’t see it for a while, the main difference between this and most other roses is that the fruit that develops is not closed at the end and is not fleshy but dry, in no way like the traditional rose hip.

These differences all add up to a situation where many botanists in the past have decided that this is not a rose at all but a Hesperhodos.*

Splitting off rose oddities is nothing new and the ‘eyed’ roses such as Bright as a Button and For Your Eyes Only owe their colouring to the Persian rose (Hulthemia persica). But that rose is very difficult to grow in the UK, though its hybrids are not.

Rosa stellata var. mirifica is not difficult to grow despite coming from a much drier environment i the wild. It is native to New Mexico, USA, in the Sacramento Mountains and it is sometimes called the Sacramento rose. It grows at high elevations so is hardy and it grows among other shrubs so does not need mad amounts of sunshine to thrive – useful in Ireland. It was introduced to the UK, at Kew, in 1917 but has never really caught on – I guess the prickles are a bit of a turn off.

The flowers are often described as lilac/pink which is a bit of a stretch but apparently the colour is affected by climate. They are certainly a pretty, strong pink. It has started to flower later than most other roses, though, as I say, most of the other species got a harder chop and have not flowered at all this year. It is reputed to have a long flowering period (for a species) but we will see as the season progresses. It is said to grow to about 60cm high and wide.

I have not had a long enough relationship with this rose to judge it yet but I like it for its unconventional looks and habit and am developing an affection for it – we will see if this lasts after I have pruned it.

I keep thinking that nothing is happening in the garden but I am wrong! Taking regular photos is a very useful way to track the progress of plants. Here is the small rose bed (planted with random favourites) on 6 May this year, the roses repeatedly nibbed by rabbits. The reddish colour on the soil is chilli powder I used to try to put off the rabbits (it worked to some extent). 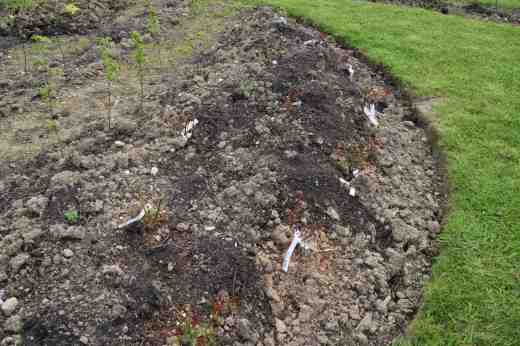 And here is the bed on 6 July, two months later. It gives me hope!

*Trying to work out the meaning of this, hespera means evening and hespero means western. Both derive from the Greek, since the sun, in the evening, sets in the west. Rhodos means red so maybe this is the western red (or pink) rose.

6 Comments on “A rose by any other name”