You are here: Home » A total wet blanket 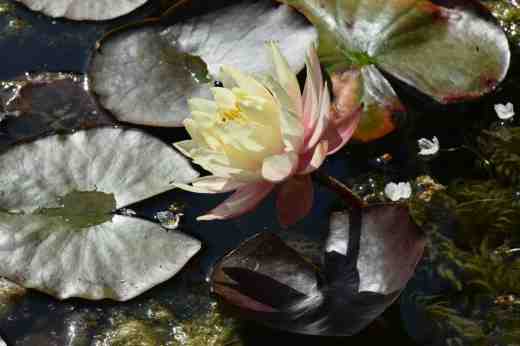 I have not posted much about water plants, so far, but that might change in the future. IN the new garden are three ponds dug out, the soil excavated last year when we hired a mini-digger to install the electricity and well pipes. It will be a while before I will have the time or money to get these lined but, being as impatient as any gardener, last year, just ti keep up my spirits, I bought a dozen or so waterlilies in various colours. They we bought bare root by post and with the exception of the most expensive one all established well last autumn and are growing well this summer. They are in a small ‘holding’ pond that used to contain some goldfish until the local heron made it its favourite snack bar. I hope they will be moved to their new home soon but time will tell.

Waterlilies are fascinating plants with beautiful flowers. They (along with most aquatics) seem so unusual and they have to cope with many challenges to survive. One thing they don’t have to cope with, since their roots and rhizomes are so deep in the water, is frost. In winter the leaves on the surface freeze, and die, but frost never reaches their growing tips. So although (common garden) waterlilies are considered hardy in this part of the world, I assume they are not actually tolerant of frost!

What is also fascinating is the way that various cultivars grow best in certain depths of water over their crowns. In general, the most vigorous lilies will cope with up to 1m over them while miniatures need 20-30cm. If lilies are too deep they pine away and if too shallow they push their leaves up above the water surface. But, waterlily flowers may produce open blooms either just above or high above the water. Often, as they age and they seem lower in the water, it is just that the stem is extending and the weight is pulling the stem over. But, if a waterlily can cope with a water depth of 45-70cm over it, which is common, how does the plant know how long a stem to produce on the flower? If the flower opens under water it is useless. This is a puzzle that is bothering me.

Anyway, I have three different waterlilies open at the moment, curiously all variation on yellow with pink blush. I bought a range of colours except purple. Blue lilies are truly tropical and although there are some hardy waterlilies that are getting close to blue they are out of my price range at the moment. I can’t name this one at present because the label is hidden in the basket in case the (now digested) fish disturbed it and they got mixed up. I will arrange and check them when they move.

But back to the story. In the hot weather the inevitable blanket weed has spread and bubbled up to the surface in a few places in the pond and as I was pulling some out to expose the lilies I noticed some small white flowers on the surface. If you are more observant than me you may have spotted them in the photo above.

These pretty little three-petalled flowers are on Egeria densa, the large-flowered waterweed or Brazilian waterweed. It is very similar to, and is sold instead of, Elodea crispa (Canadian pondweed) which is now banned from sale in the EU and other countries because it is invasive. Egeria densa is in the same family (Hydrocharitaceae) but is less invasive because it is less hardy and needs warmth to grow and flower well. I have had this in the pond for five years and it has only just started to grow profusely, perhaps because of the two warm summers and the mild winter.

The flowers have petals about 8mm long and the plants in cultivation here are all males so seed is not set – another reason why at present this is not considered an invasive species.

5 Comments on “A total wet blanket”

My garden
My garden
botany, Plants
Sweetgum and Pines