You are here: Home » Sugar sticks: a beautiful oddity 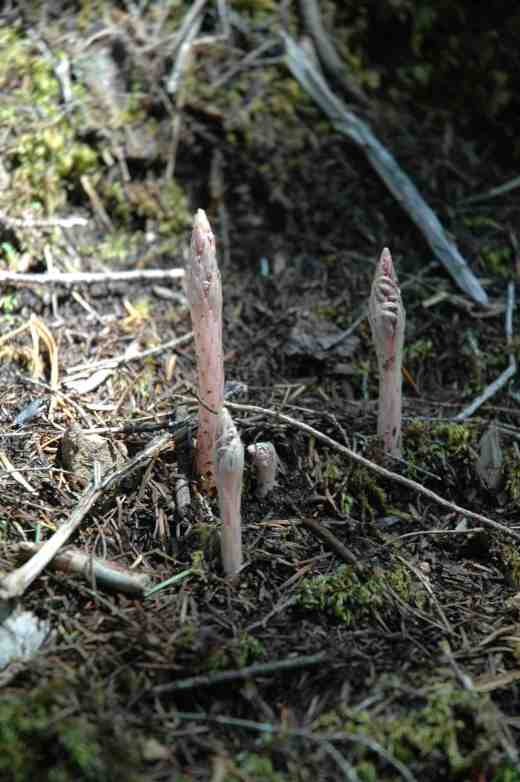 After the fiery chilli yesterday, here are sugar sticks to take the taste away, though I am not sure if these are really edible. But they are interesting and parasitic plants are always intriguing because of their curious lifestyle. Sugar sticks is the common name of Allotropa virgata and these photos were taken in the USA, in May, at Toketee Falls by the North Umpqua river in Oregon. I was a bit too early to see them in full bloom but the point of the plant – well the beauty, which gives it its name – is the white scapes, lined with bright red. It is found throughout parts of Oregon and south to north California and into Washington State in the north. Although a parasite it not parasitic on other flowering plants but on fungi. The fungus is Matsutake and the mycelium of the fungus feeds on conifers including various firs (Abies) and Western hemlock (Tsuga heterophylla). The candy sticks is termed a mycoheterotroph and cannot make its own food, deriving all its carbohydrates and presumably most other nutrients, from its host.

It is rather unusual, from my point of view at least, because it is not in the same family as more familiar parasites such as orobanches or rhinanthus (both in Orobanchaceae) but is in the Monotropoideae subfamily of the Ericaceae, the family that includes rhododendrons and pieris.

The flowers are small and white with prominent dark red stamens but rapidly turn brown, the scapes growing to about 40cm in height. The leaves are white and scale-like. 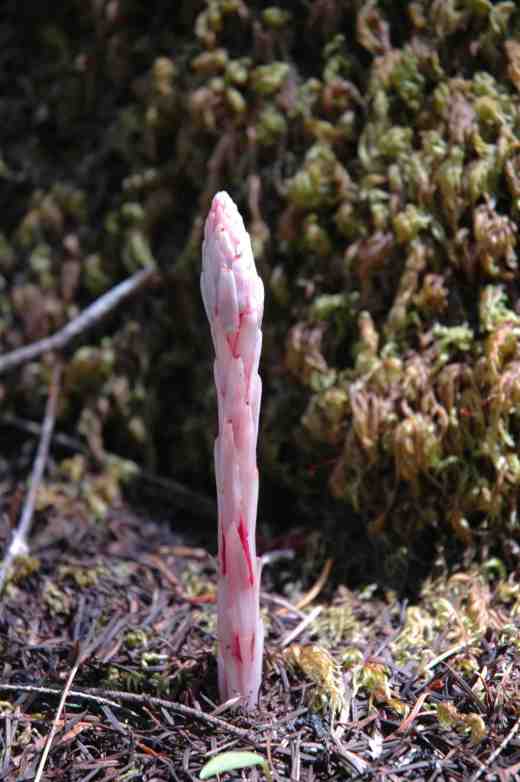 It is related to monotropa, or Indian pipes, a genus of parasites that is found throughout the USA in various species. These have nodding, tubular flowers though, on crook-shaped stems. Because it needs no light to grow, and because the fungus is most likely to attack old trees, allotropa is most often seen in dense shade under the trees. Oddly though, the flowers produce copious nectar and are pollinated by bumblebees. Altogether a thoroughly odd plant.