You are here: Home » A bunch of roses

I love roses and I am fortunate in having been able to plant a new rose garden. It is now in its second year and the roses have all settled in really well and are just starting to bloom. I used ‘Rootgrow’ when planting to help them establish and the heavy soil was improved with sand and mushroom compost. They had a hefty prune this spring and a mulch of mushroom compost and a feed of pelleted chicken manure to give them a boost. I would have used a rose fertiliser but mushroom compost is a bit low in nitrogen and the wet winter may have leached nitrogen from the soil so I thought the extra nitrogen in the chicken manure would be helpful. It certainly did not do any harm because the roses are all looking fine.

I chose the roses for their health. Although I wanted primarily pinks, white, mauves and ‘blues’ and I also wanted scent, I only chose roses if they were at least ‘resistant’ to disease and ideally ‘very resistant’. I have not sprayed them at all so far, either for disease or pests. Very few have any disease although there is a little on the lower leaves of a few which I will watch carefully. 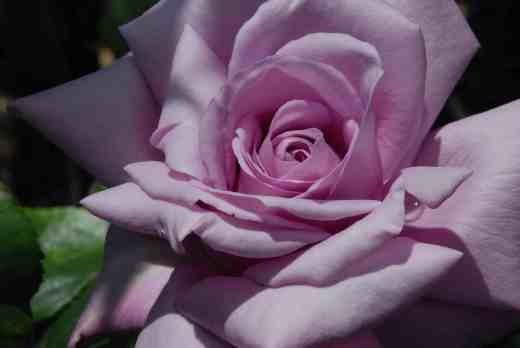 For a long time I have admired ‘blue’ roses and I have loved the flowers of ‘Blue Moon’. But I will not grow it because it is a terrible plant, succumbing to blackspot and every other disease. The delight of the flowers does not compensate for the dreadful plant and I am not going to add a rose to the garden that needs constant spraying. But in 2004 the German-raised ‘Twice in a Blue Moon’ (TAN96138)  was introduced by Tantau roses. It is a wonderful rose. It is healthy and has dark green leaves on almost spineless stems. The flowers are big, a delightful mauve colour with pink flushes to the buds and highly scented. Some weak stems are too thin to hold the flowers so, as with any Hybrid Tea, it should be pruned hard to encourage strong shoots. It is the perfect cutting rose but also looks good in the garden because of the sheer size of the fully open flowers. 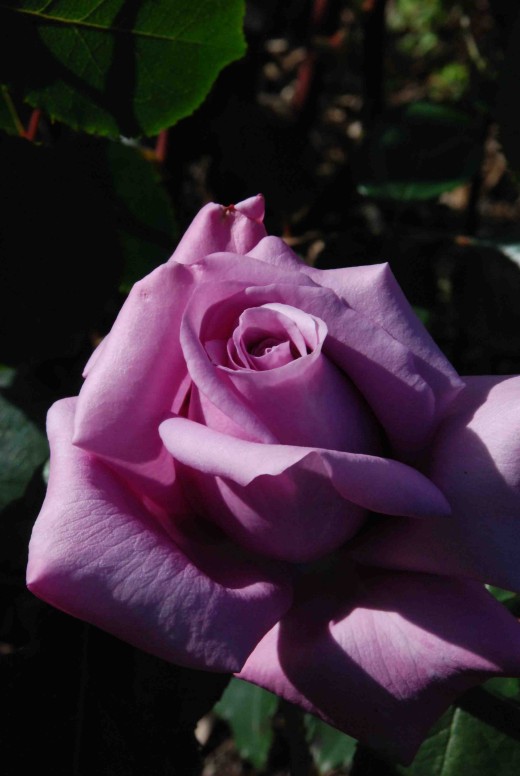 They are perhaps at their best when only partly open. They have the perfect, classic Hybrid Tea shape – and a scent to match

‘Golden Wings’ is not much use for cutting and it hasn’t got the strongest of scents but the large, open flowers, that start bright yellow and fade a little to primrose yellow, are freely produced all summer, especially if you deadhead the faded blooms to prevent the decorative hips from being formed. It was introduced in 1956 and is a large shrub that should a loose hedge about 2m high. 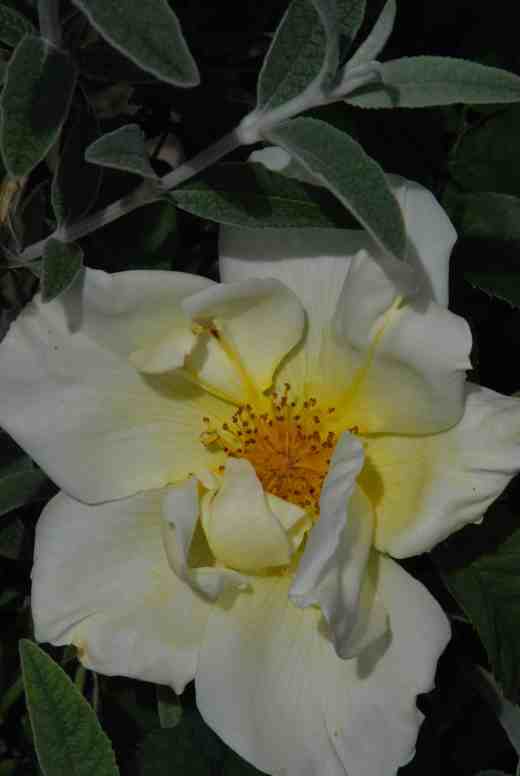 ‘Rosa Belmonte’ (Harpearl) is a rather strange name for a new rose from Harkness. It was introduced in 2007 and is the perfect rose in many ways. It is strong-growing with thick, iron-like stems and clusters of large, sweetly scented flowers in pale pink. The shading of the blooms is deep pink in the heart and paler at the edge. It has been free from disease so far and is a great rose for picking as long as you watch out for the large thorns. 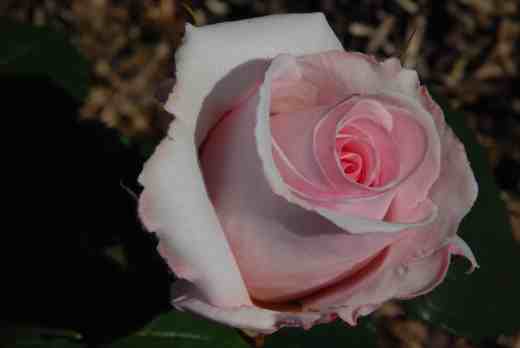 ‘Margaret Merril’ (HARkuly) was introduced in 1978 and is one of the most popular white floribundas. It is more compact and has a bit more class than the ever-popular ‘Iceberg’. It is also probably more fragrant. The flowers are lovely in bud and they open to reveal beautiful red stigmas in the centre of the bloom. Unfortunately it has a little bit of blackspot on some older leaves and it may have to be sprayed – we will see how and if it develops. 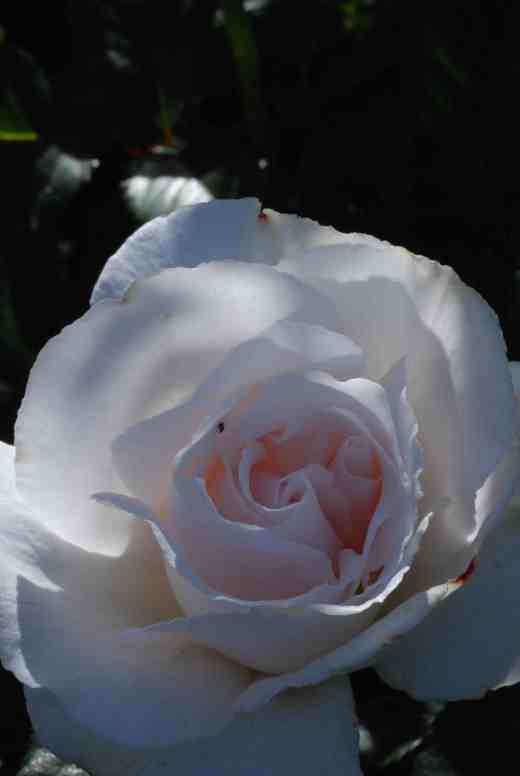 ‘Margaret Merril’ is a Harkness rose that is, perhaps, showing its age a little now and can be prone to blackspot but it is a beautiful white rose that is blushed with pink, in some weather, as it opens

‘Eyes for You’ (PEJbigeye) is an unusual, semi-double cluster-flowered rose with matt foliage and intriguing blooms that look more like exotic tree peonies than roses thanks to those amazing dark blotches at the base of the petals. It was raised by Peter James in the UK and introduced by Warners Roses in 2009. Its unique looks are thanks to genes from the closely related persian rose (Hulthemia). Much of the early work in bringing these ‘eyed’ roses to the public was carried out by Harkness and at last the beauty of these unique flowers is reaching the mass market. ‘Eyes for You’ is a good garden plant with compact habit and it repeat flowers well. There is good scent and I have not seen a spot of disease on it. My only quibble is with the extra, small petals in the centre of the blooms which obscures the eye. Also the flowers are not always so well coloured in very hot weather – but that is  a problem we don’t have often. 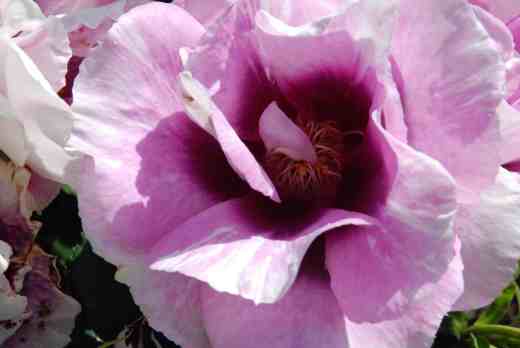 ‘Champagne Moment’ (KORvanaber) is a good, modern shrub rose although it is officially a cluster-flowered rose. It is a thorny rose with small clusters of beautifully formed flowers. It is not perfect for cutting because the new buds grow beyond the older flowers but this is a good trait in the garden. It was introduced in 2007 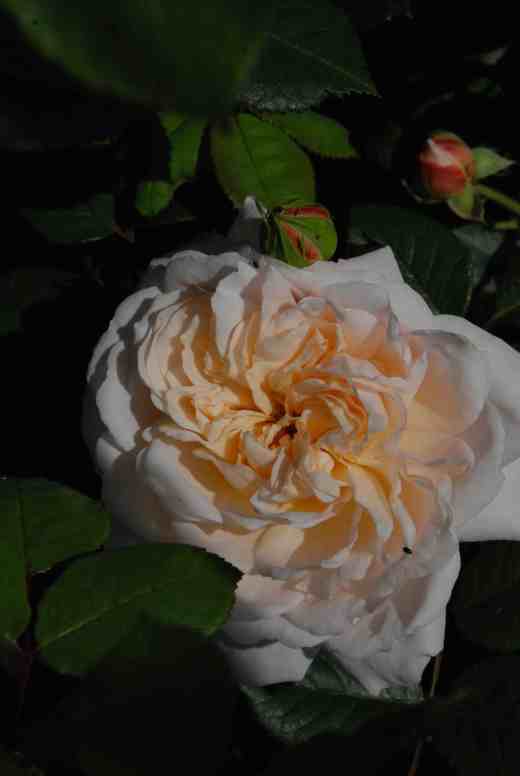 ‘Cape Diamond’ is a bit of an oddity in this group because I think it has less beauty in its flowers than the rest. But its pink at least adds a different colour to the post! It is an Canadian hybrid that was bred for its hardiness and resistance to disease and introduced by Week’s in 2008. It is very prickly and flowers for a long time and would make a good rose hedge if you want something different from the typical Rosa rugosa! It has a good perfume and is an ideal choice if you want a rose to put in a mixed shrub border where you need something colourful, fragrant and no-maintenance (apart from pruning).

‘Cape Diamond’ is a hardy, tough rose that would make a good hedge