You are here: Home » Libertia grandiflora: a beauty from New Zealand

Plants from the Southern Hemisphere are oddly unfamiliar to us gardeners on the other side of the world and sometimes pose challenges for us when trying to integrate them into our borders. Apart from finding the spot where they will actually survive they are so different in appearance that they don’t always look right next to lupins and delphiniums. Their flowers are intriguing too because of the environment in which they evolved. Because there are no native bees the flowers tend to be designed to be pollinated by birds and are often red, robust and copiously filled with nectar or are green or white and scentless, pollinated by flies. The New Zealand flora has more than its fair share of white and green blooms and even familiar genera such as clematis have representatives that are decidedly odd such as the leafless, green-flowered Clematis afoliata. In recent years libertias have become popular because of their grassy, evergreen foliage and they have been recognised as more suitable plants than the phormiums we all filled our gardens with until recent winters killed a great many, to the relief of  gardeners who were finding them unmanageable monsters! 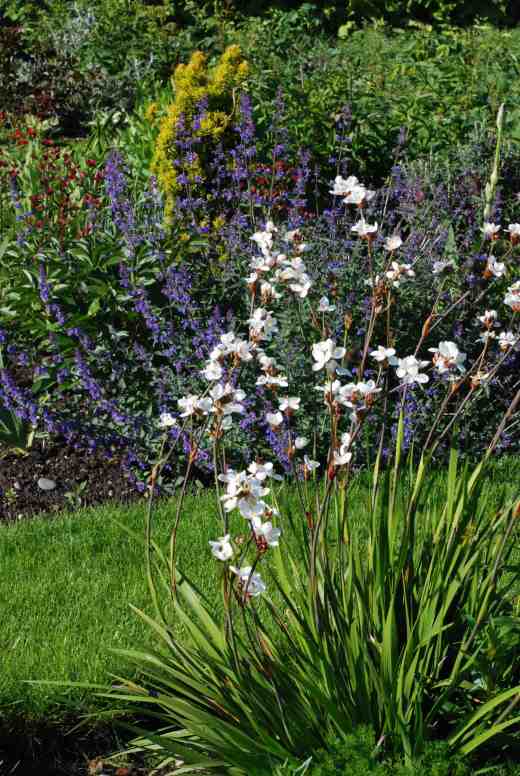 Libertia grandiflora is one of the bigger species (there are 15) and lacks the golden ochre colour of some of the more popular kinds but it is a valuable border plant. It is not ‘completely hardy’ and I would say that in much of the UK it is on the borderline of hardiness and best used in mild and coastal gardens. But here in Ireland it seems a reliable and common garden plant and is in lots of front gardens. It forms a neat clump of upright, narrow, deep green foliage that can reach about 80cm high and slightly less across at first though if it is happy in your garden you can really expect it to take up a cubic metre of space. The flower stems are slightly taller than the leaves and they branch a little to produce an airy stem with dozens or maybe hundreds of three-petalled white flowers. The stems keep on producing blooms for many weeks and the plant is in flower for several months from late spring into summer. The plants here, in the photos, have been in flower for several weeks and have many more weeks to go. The stems make great cut flowers and last well, giving an airy addition to bunches from the garden.

The three petals and three stamens confirm that this plant is in the iris family. It will grow in most soils and although it is supposedly drought-tolerant and often said to prefer well-drained soil it has done extremely well in the heavy soil here. The plants were put in a year ago and you can see how they have developed in the top photo. When the flowers eventually finish the stems carry attractive round seed pods. It may self seed if it is happy but I can’t see this plant ever being a nuisance. It will grow in full sun here though in warmer climates it should also do well in part shade. It is ‘normal’ enough to fit well into a traditional garden but it would also suit minimalist designs too and it would be striking in stainless steel containers. I would also love to use it in brick paving so soften a courtyard where its white flowers would lighten a small town plot. 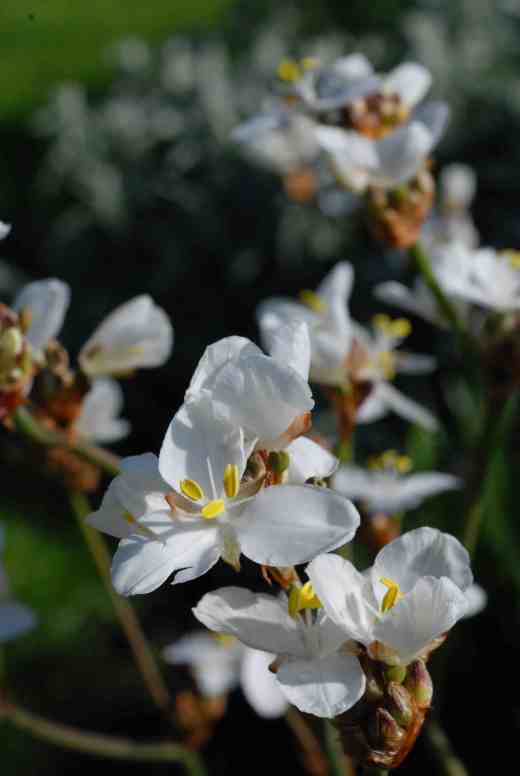 Libertias are named after Anne-Marie Libert, a Belgian botanist (1782-1865)

2 Comments on “Libertia grandiflora: a beauty from New Zealand”