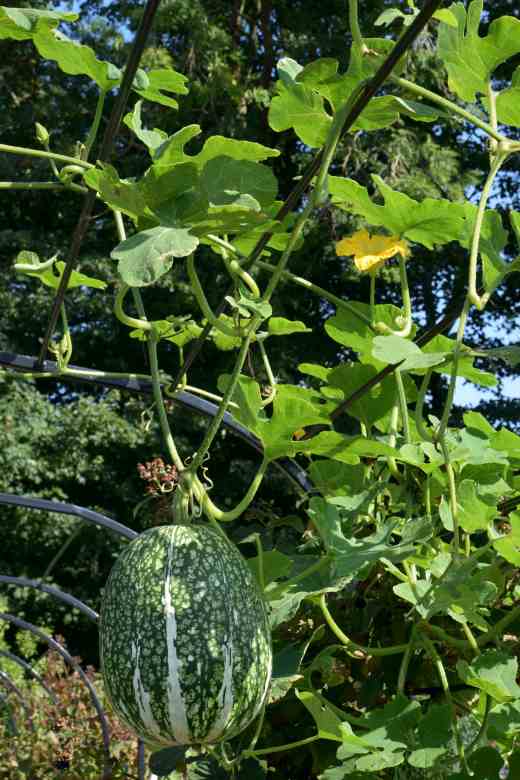 After one plant from Malabar (or not as the case may be) here is another. But, despite being named after the south west coast of India, it actually comes from South America, like most edible cucurbits. I have known and grown this interesting plant many times over the years and, having found seeds again, am trying it again this year, but the plant above was grown a few years ago, but still in Ireland.

Botanically Cucurbita ficifolia, the fig-leaved melon, it is an annual that is capable of extraordinary growth. It is frost-tender so the large black seeds need to be sown, in their edge, in individual small pots, in gentle heat (20c) in spring and the young plants put out after the last frost in spring. Although young plants are killed by frost, in autumn the old plants can withstand a light frost or two. What I love about the plant is that it is rampant! Even in the cool climate here it will easily reach 4m high (or wide) and in warmer, sheltered places it can easily exceed that. If allowed to sprawl along the ground it will root as it goes. The lobed leaves look quite exotic and the yellow flowers (both male and female on the same plant) are big and beautiful. Soon after pollination the fruits start to swell and they are really beautiful, striped and spotted like a watermelon. If it is grown as a climber the fruits hang from the stems, which are incredibly strong, and the fruits hang from the support, making it fun and hazardous to walk beneath. The fruits are about 40cm long and weigh about 5 kilos. Each plant can carry lots of fruits and even here a dozen fruit is not unknown. As they ripen the ‘shell’ also becomes incredibly tough and ripe fruits can be stored, if necessary, for several years. In times past the fruits were taken on sea voyages for food because they store so well.

Like all cucurbits, this loves moisture, feed and organic matter. Grow it in poor, dry soil and it will be a mere shadow of its potential.

So, I hear you asking, what does it taste like? I have to admit that I have no idea. The insides are white and stringy and full of large, black seeds. But I am being uncharacteristically unadventurous here. Apart from being used as animal feed, the fruits are eaten. In parts of Spain it is used to make cabello de angel which is a jam – not so weird since marrow jam was (is) made in the UK at least, though it seems like an excuse to eat sugar and must need ginger or lemon to give it some flavour – I am sure that cabello de angel is the same. In Portugal it is used to make sweets and in Asian countries it is used to make a soup similar to shark’s fin soup without the hideous cruelty.

Nutritionally it is pretty poor but the fruits contain D-Chiro-inositol which is used to treat diabetes, depression and high cholesterol levels – but which is probably not very useful unless you eat it every day.

In addition the young leaves can be eaten as a vegetable.

But I like to grow it purely as a novelty and am looking forward to see how it does in rural Ireland this year. I have a big pile of manure ready for it so I will give it the best possible start.