Nasturtiums are often the first plants we ever grow, and now their petals festoon the creations of the finest chefs. 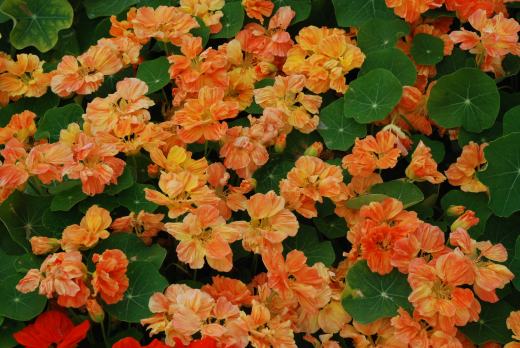 OK, here we are with a big one.

Mention annuals to most people and they will think of nasturtiums. More properly called tropaeolum, these South American hardy annuals are usually considered ridiculously easy to grow. The genus Tropaeolum, the only one in the Tropaeolaceae, is a large one and includes a range of fantastic and beautiful herbaceous perennials with tuberous or rhizomatous roots. They include some of the most desirable of all hardy climbers. But for now we are dealing with two species that are annual, plus a less familiar climbing species. Though they are usually called hardy annuals the plants themselves cannot tolerate frost, but the seeds will remain in the soil over winter and sprout in spring.

What’s in a name?

But before we get involved in the species and how to grow them, a few words about the name. Gardeners are very odd when it comes to plant names. I know that tropaeolum is a bit of a mouthful but it is strange that people lap up nasturtium with no worries, not realising that it is, in fact, the botanical name of watercress. Nasturtium means ‘twisted nose’ referring to what happens to your face when you eat it. That peppery taste is the result of all those healthy, sulphur-containing chemicals. Why tropaeolums should share the name of a brassica may be because they were originally called Indian cress.

I know that when I start to explain things I often get bogged down in details but, the observant among you may have noticed that Indian cress does not come from India. But it does come from Colombia and has long been grown in the West Indies – hence the name. Blame it on Columbus.

The name Tropaeolum is derived from the Greek for ‘trophy’, the plant’s round leaves held high, like shields, and the blood red flowers, reminding Linnaeus of a battlefield. He needed to get out more. But more of the Linnaeus family and nasturtiums later.

Now we have that all cleared up, most garden varieties are derived from T. majus, possibly involving T. minus and T. lobbianum. A characteristic of the genus is the peltate folliage, the rounded leaves attached to the petiole in the centre. Although some species have lobed leaves, rather than the almost circular foliage of nasturtiums, the attachment is the same. The flowers have a calyx with five lobes and a spur and five free petals, the lower three especially, spotted, patterned and fringed with hairs. 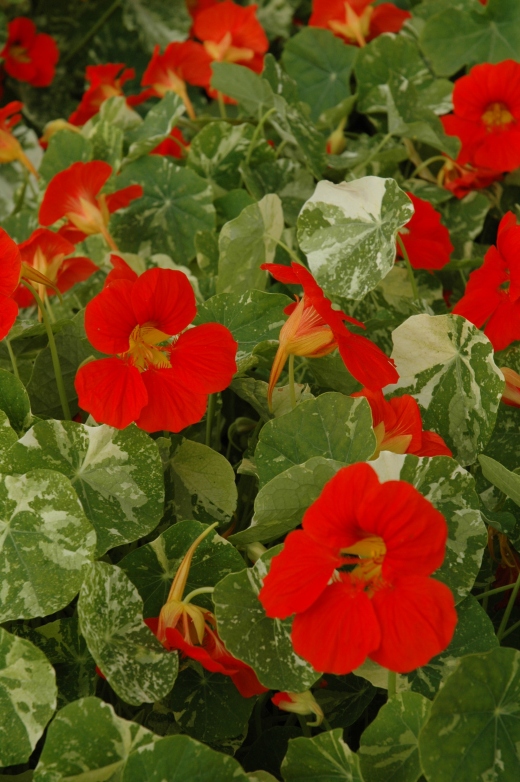 Despite their ease of cultivation, I have often thought they were the most difficult annuals of all to grow. This is because they attract a host of insects! They are more popular with cabbage-white butterflies than cabbages, and they get attacked by blackfly quicker than broad beans! The plants are frequently ruined by these pests. For this reason it makes me laugh when you hear them recommended as companion plants to discourage these pests. The only logic I can imagine for this is that they are sacrificial plants, attracting the pests away from the crops. The other problem, apart from self-seeding, is that, in rich soils the plants can be leafy and vigorous and the flowers can be hidden somewhat. They are recommended for dry banks but then blackfly can be really destructive. You can’t win sometimes and breeders have been working to produce nasturtiums with better-placed blooms, above the foliage.

And then, of course, nasturtiums are edible. All parts of the plants can be eaten and they have a hot, peppery taste. I find it slightly unpleasant and not the same as cress at all. But they are so easy to grow that it seems overly picky not to advocate them as an edible. The flowers taste better than the  leaves and they are good stuffed with chopped egg and mayo. But you need to pick over the flowers carefully to make sure there are no blackfly at the back or pollen beetles inside – let alone a bee! Edible flowers are ridiculously fashionable these days and if these things matter to you then nasturtiums are among the easiest and most palatable of them, and good for you too, though no one is likely to eat a medically useful amount of flowers except, perhaps, cauliflowers.

The young seeds are edible too, picked young they are pickled and used as a cheap caper substitute. 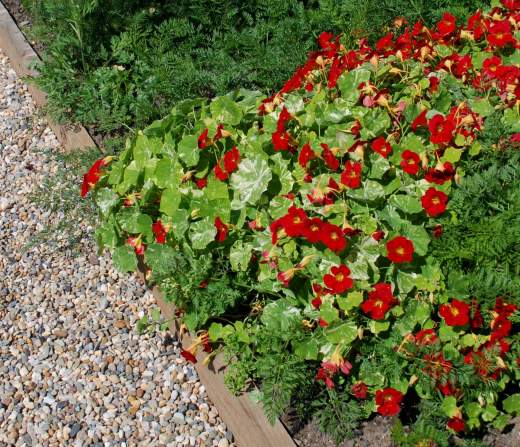 So, if you want to grow nasturtiums, and I grow them every year, sow the seeds in pots in April or direct in the garden in late March. There is no use starting them too early because they grow quickly and will not survive a frost. These will not survive overwinter from a September sowing either. There are climbing and compact, bush types. Flower colours vary from cream through yellow and orange to crimson and almost purple. Many have contrasting spots and splodges. Those with variegated leaves, which come true from seed, are especially decorative. A few years ago the ‘Phoenix’ types with deeply cut petals was popular but it was not too stable and does not seem that common now.

In theory T. majus is perennial and there are (or were) doubles that had to be propagated from cuttings and kept free from frost over winter. In my previous life I grew ‘Hermine Grassoff’ with small, double red flowers and the soft orange ‘Margaret Long’. These are both relatively weak growers so make compact plants and do not set seed. They are very special. Some seed-raised kinds have ‘double’ flowers but they are not quite the same.

Nasturtiums can be used in any sunny place in the garden and are good to fill large areas cheaply. They are often recommended for hanging baskets but I am not that keen on the idea; they are a bit ‘cheap’ for a hanging basket – a bit like being invited in for a sherry and being given a glass of British sherry or Emva Cream (this may not make much sense to those not in the UK but neither are very good – I wouldn’t even put them in a trifle).

I can’t move away from nasturtiums without being side-tracked by the phenomenon of the flashing flowers or Das Elisabeth Linné-Phänomen. This was apparently first noticed by Elisabeth Linne, the daughter of Carl Linne (Linnaeus). It makes sense that Carl Linnaeus would have them growing in his garden in Uppsala and apparently Elisabeth was looking at them at dusk and she noticed bright flashes of light coming from the flowers. It was originally thought that this was caused by electricity generated by the plants – which must have caused great excitement – imagine a new plant that produced electrical current! Unfortunately the real cause is rather more prosaic, though fascinating in its own way,  and caused by the way the brain perceives colour.

From Nature, June 4 1914: ‘Her discovery interested a number of scientific men, who ascribed the appearance to electricity, phosphorescence, etc., or rejected it as imaginary and only visible to those who could see ghosts. High above them all stands Goethe, who answered Elizabeth Linnreus ‘s pertinent question “whether the flashing is in the flower or in the eye,” by referring to the effect upon the eye of brilliant complementary colours, and by pointing out that the flashing is only seen in a flower which comes sideways into the field of vision. Prof. Thomas gives an explanation of the phenomenon. It is perceived, he says, in twilight, which makes red brighter and green duller than they appear in full daylight. As the image of the red flower moves from the peripheral part of the retina, where the rods are red blind, to the fovea, the red is perceived somewhat more vividly than before, and this image coincides with the Purkinje (neurons) after-image of the surroundings, giving the impression of a flash.’ I will have to check this out this in summer.

It is sad that, Elisabeth endured an abusive marriage, which she abandoned after a few years, but that may have contributed to her death at just 39. She made her observations of nasturtiums at the age of just 19 and it was noticed by Erasmus Darwin (grandfather of Charles).

I need to wrap this up, but not before mentioning two others. Tropaeolum peregrinum is often called the canary creeper. Apparently this may be because it was thought to come from the Canary Islands – it is actually from Peru. I am more than happy to believe that the reason for the name is because the open flower resemble a flying canary! It is not easy to see from the image below but you can pop back to a previous post here. It is a hardy annual that will climb to 2m or so in sun or partial shade. It often self seeds freely and is a pretty, happy-go-lucky kind of plant. 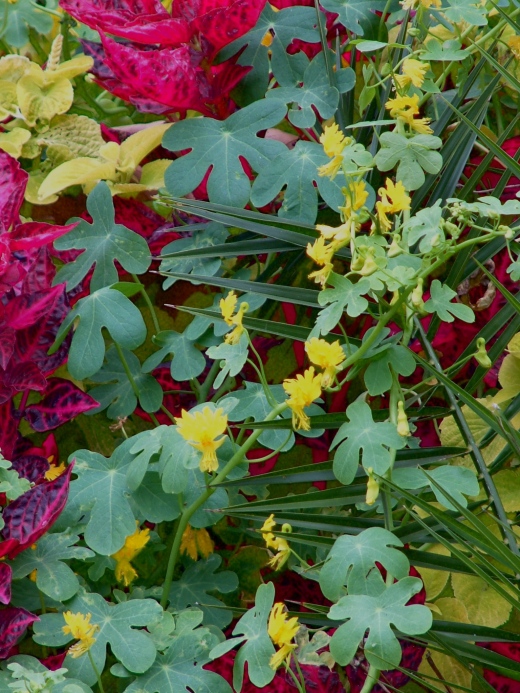 And finally, one of the many real celebrities in the genus. While the common nasturtium is such an easy plant to please, many species, though not impossible to grow, need specific treatment. Many are best in a cold greenhouse to protect them from wet when dormant while others can be grown outside in scree and rock gardens. The most famous of them all is the Scottish flame flower (T. speciosum), from Chile. It needs moist, acid, leafy soil and dislikes hot, dry conditions in summer – hence it does well in Scotland. It is at its best when grown up yew (taxus) hedges, a remarkable feat of horticulture as the hedges need to be trimmed in August, just when the tropaeolum is flowering. Where happy, it is as vigorous as bindweed, clothing hedges with growth up to 3m. In drier soils it is more sedate but will still bloom on plants a third as high.  It is notoriously difficult to establish and should be left alone once it is growing strongly. It is best to cadge fresh seeds, sow in pots and plant out as young plants rather than bare roots. 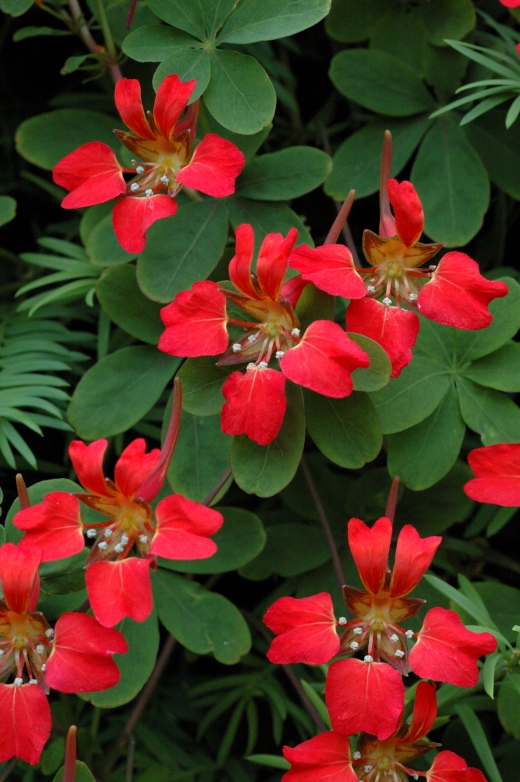