Surprisingly easy to grow from seed, these perennials can be treated as annuals.

Dahlias are Mexican in origin and truly perennial. They are closely related to cosmos and I am not sure of what separates them. We tend to regard cosmos as annuals but then there is the chocolate cosmos which is a tuberous perennial. Bigeneric hybrids are reputed to exist but, trying to extract the truth from nursery exaggeration can be difficult. What is certain is that dahlias are perennials with tuberous roots that can be saved from one season to the next. It sometimes comes as a surprise to gardeners to discover that dahlias can effectively be raised from seed and will flower the first season.

I grew up among dahlia fanciers and grew dahlias from tubers. Though there were seeds of tall dahlias available with Decorative and Cactus blooms, these were never seriously considered because the flowers were never fully double and didn’t meet the strict criteria of serious dahlia growers. At this time dahlias were considered to be show flowers and had no place in the ‘ornamental garden’. But then ‘Bishop of Llandaff’ was hauled out from the back of the horticultural cupboard, largely because of appearing on TV with Geoffrey Smith, and things changed. The ‘Bishop’ became the plant to have because of its semi-double shockingly red flowers set against rich dark foliage. It was soon realised that it had its place in the bright, tropical flower schemes that were becoming all the rage after a decade of pastels. Dahlias were changing.

Dahlias in general are now truly accepted in the garden and there is a curious trend for single flowers. A whole series of ‘Bishops’ were created and international breeders concentrated on dark foliage. The ‘Happy’ series was introduced. I was keen to try ‘Honka’ with eight twisted, yellow petals and the allure of being the first fragrant dahlia. It seemed a retrograde step as far as dahlia flower development was concerned but it is a great garden plant and though the scent is not astonishing, it does smell pleasant. And the timing of single dahlias was perfect as it coincided with widespread concern for garden wildlife and dahlias attract bees and butterflies as effectively as buddleias. Growing dahlias from seeds gives mixed results which is either exciting or a pain. I grew seeds of ‘Twynings After Eight’ which is a gorgeous bushy plant with dark leaves and white single flowers, and the seedlings had flowers of every colour except white – though all were good plants and the butterflies didn’t give a hoot. I think there is a danger that we are getting a bit sloppy in our standards in dahlia flowers as we concentrate on what the bees like best. But it has to be said that they offer so much more for wildlife than big doubles.

So I would not bother to grow tall doubles from seed. For me, the scruffy flowers that try to be large and double but always fail, are the worst of all worlds. In contrast, seeds of single tall dahlias such as the oddly named ‘Bishop’s Children’ always give a satisfying display of attractive plants. 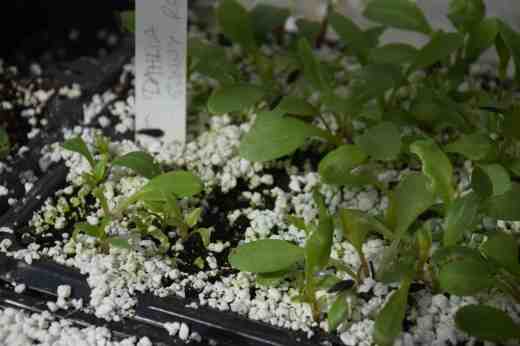 Which brings us to raising dahlias from seeds. Dwarf dahlias, with single or semi-double flowers have long been raised from seed for bedding purposes and they are very satisfactory. ‘Fireworks’ (pic top) was bred by Thompson & Morgan and was a breakthrough at the time with striped petals. The dwarf seed-raised dahlias must not be confused with vegetatively propagated types such as the micro ‘Dahliettas’ (TM) which I personally hate because they are so close-jointed and have no guts. Seed-raised types are far better although they do need deadheading to keep them blooming.

Dahlias are among the easiest of all plants to grow from seed and they flower surprisingly quickly. I would delay sowing till April because of their fast growth and their need for good light. The fleshy seedlings pop up quickly when sown at 20c but the cotyledons are brittle so handle with care. They are also very tasty to slugs and woodlice so be warned. But they grow very rapidly and are often starting to bloom by the time you are ready to plant them out, after the last frost of spring.

Of course I am treating them as annuals here but, if there are plants you especially like you can save the tubers and keep them for another year.

How to do it
Uncategorized
My garden
Sweetgum and Pines