You are here: Home » The double border – progress

Following yesterday’s post about an area of the garden, today I am showing the main pair of borders down the garden from the house. As with other areas of the garden, some plants were put in last year and I did not get round to digging over all the beds till late this spring, incorporating lots of compost. This allowed lots of new planting. Some are perennials and there are lots of annuals. The beds are about 2.5m deep so shrubs will be put in the back and there are hornbeam hedges down the back of each though these are still small, being just 2 years old. I am looking forward to all the hedges growing so the garden has more structure – but not the trimming.

I spent Wednesday, finally cutting out the edges of the beds to define them and, at last, the beds are starting to look like a garden, even though the lawn needs cutting.

The lawn is 50cm narrower at the far end, to accentuate the perspective and make it look longer than it actually is – though it is quite long.

There is no definitive colour scheme yet and although I am planting similar colours opposite each other in some places the colour associations vary along the beds – I am not committing myself yet.

Alstroemeria ‘Indian Summer’ is a great plant. I like the subtle variegation of the dark leaves and the flowers are bright. It takes a light frost in its stride and it flowers on and on. It made the basis of a planting including the old variegated day lily, Itoh Peony ‘Bartzella’ (which flowers much earlier of course), a kniphofia (that is yet to show flowers), heuchera ‘Ginger Ale’ and a torrent of variegated nasturtiums. I know I will regret planting these – they will seed everywhere and plague me for years. But they are cheerful at the moment and attract cabbage white butterflies that keep the cat amused and fit.

Another self seeder is Tinantia erecta. This was an accident. I grew it at work years ago and somehow a single seed must have popped itself into a pot I brought it back. Last year this single plant grew and I let it do ‘its thing’. What I didn’t realise was that ‘its thing’ was to seed like mad. And even though I dug over the area, which had been covered in compost first, it is growing over a huge area. For now, I am not bothered because it is keeping down the weeds and the first autumn frost has the effect of boiling water on spinach, but I am going to have to watch this one. 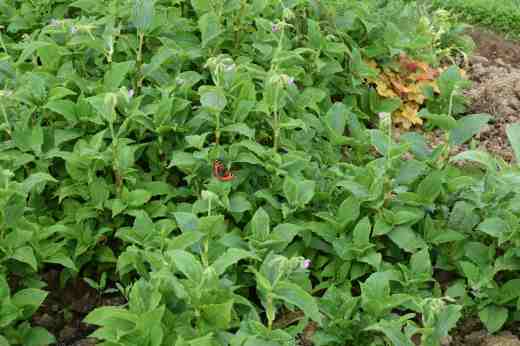 The irony is that it has very little ornamental merit and the T. pringlei that I love, have had for years, and was the reason why I experimented with this plant, is barely hanging on in the garden.

I have also grown the annual ‘Amazing Grey’ poppy. It is interplanted with red achilleas, again from seed, and in front of alstroemeria ‘Spitfire’ with red flowers and variegated leaves. The idea was that it would be a fiery combination, the grey flowers like smoke above the bright red flowers. I wonder why I have these daft ideas.

It has, so far, been a minor disappointment caused largely by the late flowers of the achilleas – but there is time. But worse, the poppies have too much purple in them for my taste so they look less like smoke and more like bruises. 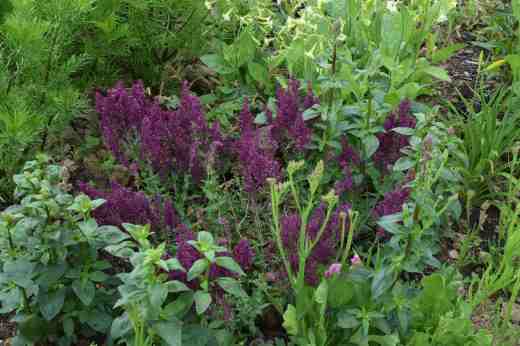 I have higher hopes for this combination of statice, purple antirrhinums (yet to bloom) and the wonderful Salvia nemerosa ‘Schwellenberg’. This is a bit of a freak because the flowers do not develop and the colour is provided by masses of tiny bracts but my goodness is it a great plant. It has been in bloom for months and shows no sign of stopping. The weight of the ‘flowers’ makes it a bit floppy but new stems are growing in the centre to fill in. I have even cut some stems for the house. It is hardy and I planted it last year and it survived the winter in the juvenile border so it is tough too. I know that I am opening myself up to criticism for planting something that is so useless for bees but I feel I have more than enough other flowers to make up for this.

6 Comments on “The double border – progress”