You are here: Home » Lilac and laburnum

I know that this will be slightly contentious because not everyone likes lilacs but I am very fond of them and have always had one in every garden I have had. I know that they are rather coarse, and that the leaves have no autumn colour  but I can forgive that for the two weeks when they are covered in blooms that have one of the best fragrances of the gardening year. Since the first buds popped open into their four-petalled blooms I have been out whenever I can, to push my eager nose into the dense clusters to drink in the perfume. So far I only have ‘Michael Buchner’, for no particular reason, but will add another one or two. What they do have in their favour is toughness. They will grow almost anywhere and the fact that mine, planted last year, has grown, produced flowers and is putting on new growth 30cm long already is proof of this.

Pruning lilacs is always tricky but the best thing to do is to remove weak stems when you deadhead them so that strong shoots remain that will have the best chance to flower the following year. Shortening of the stems is possible but done too often will reduce flowering.

In my mind, lilac is closely linked with laburnum. I think the reason for this was my annual visits to Chelsea Flower show when, leaving Sloane Square tube station the route took me past garden squares that were always rich with the two plants in full boom. They remind me of those happy days visiting the show.

So it is inevitable that I planted two laburnums ‘Vossii’, though in a different part of the garden. They form the entrance to my yellow and white garden and last year they seemed to establish well. There were no flowers but they put on growth. Come to this spring and… nothing.

I am at a loss. The buds have hardly swelled at all. They have a silvery look as though they are ready to pop but nothing. I took one off and it is green. My worry is that the winter was so wet that the roots are damaged. I have planted under and around them and so watered the beds but nothing. The yellow roses beside them are growing and have flowers and even the copper beech hedge nearby, which is an ongoing struggle to establish, is in leaf. But the laburnum – nothing. I will have to wait but I am beginning to fear the worst.

In contrast, my two Malus toringo ‘Freja’, the nearest of which is just 3m away, are a delight. The flowers are almost the same colour as the leaves so you can’t see, at first, just how prolific the blooms actually are! But the bees have found the slightly fragrant flowers and yesterday the trees were humming with all the activity. Annoyingly there were no bees on the eating apples nearby! 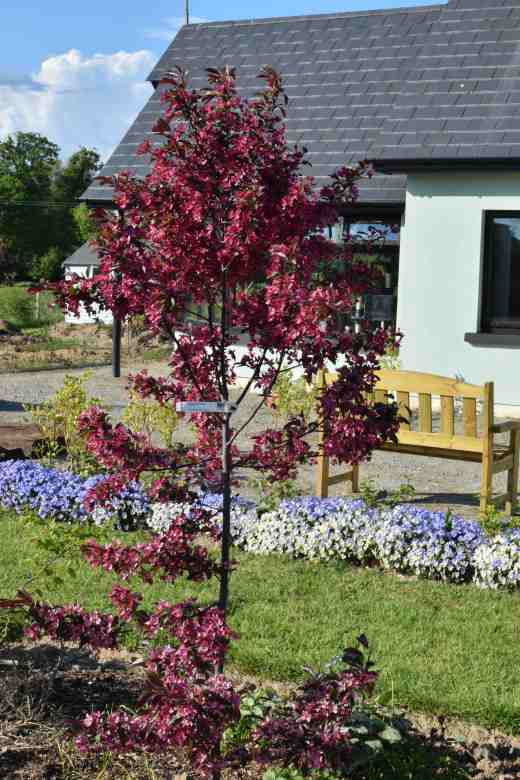 I think I have had these long enough to judge them and because they have done so well and flower so prolifically and (so far) have had none of the potential crab apple problems I will risk being generous. I am always a little concerned about planting purple foliage in a rural setting – it can be very intrusive and looks unnatural. I think they are often better suited to urban and ‘populated’ environs. So these two are nearest the house and will not ‘pollute’ the rural views.

Garden rating (as a small tree)

6 Comments on “Lilac and laburnum”