You are here: Home » And another mystery plant: Fuchsia excorticata x F. magellanica 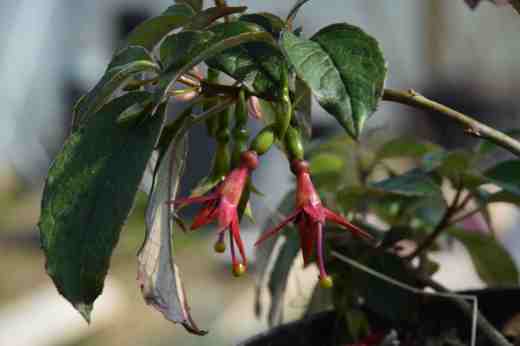 I was delighted to discover, the other day, that a plant I had ignored for months, was in bloom. This is particularly unfair of me since when I saw it and immediately bought it last autumn I was very excited. It is the fairly improbable hybrid Fuchsia excorticata x F. magellanica according to the label. Now that it is in bloom I am not sure if it really is. Fuchsia excorticata is about as odd as a fuchsia can get, and they are a pretty varied bunch. But this one comes from New Zealand so it is bound to be that little bit different. I have never grown it before but am familiar with that other odd New Zealand fuchsia: F. procumbens. This little creeper has alternate leaves instead of the usual opposite leaves and small flowers that face upwards instead of the usual downwards. It is from the North Island and not really hardy. All very odd.

Fuchsia excorticata is odder still because this one is not a ground-hugger but a tall shrub – it is the world’s biggest fuchsia species, growing to 12m in the wild. It too has alternate leaves but it is the flowers that make it very strange. These are produced from the bare, old branches, in small clusters and they have sepals and tube of the same strange purple-red, green at first, and no petals to speak of. My hybrid (?) does have petals, but very small and, after doing a bit of a google trawl, I think my flowers are typical of the species. If it is truly a hybrid I would expect more of an influence of F. magellanica in the flowers and foliage.  So is it a hybrid? Well there are some interesting species-hybrids but the Pacific species are so different that I am not sure they would cross with the big South American group of which F. magellanica is probably the hardiest and best known. 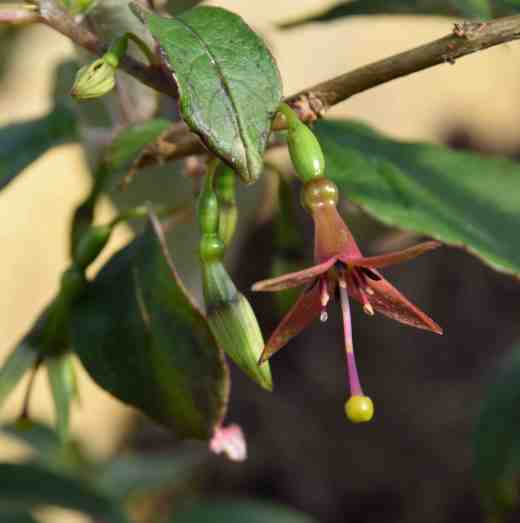 It seems, to me, to be pure Fuchsia excorticata  and the leaves have the typical pale, almost silvery underside. It is a very curious plant. It is gynodioecious, meaning that populations have all-female plants and other plants with male and female (perfect) flowers. The bark is attractive as the plants mature, peeling to reveal reddish bark beneath. It is from the South Island and is apparently a tough cookie, threatened mostly from possums which relish it for their five-a-day, eating foliage, flowers and fruits. The flowers are pollinated by birds and would be quite showy in the wild, despite their small size, because this is a deciduous shrub. My plant has retained its foliage because I have had it in the polytunnel. Now it is larger and will have a season to establish it will go into the garden but in the most protected, semi-shaded spot I have, near my mitraria and crinodendron. My knowledge of this plant is largely through the huge plants growing at Mount Usher in Wicklow, by the river. I am hoping that, since it obviously thrives there, I stand a good chance with it here. Time will tell. 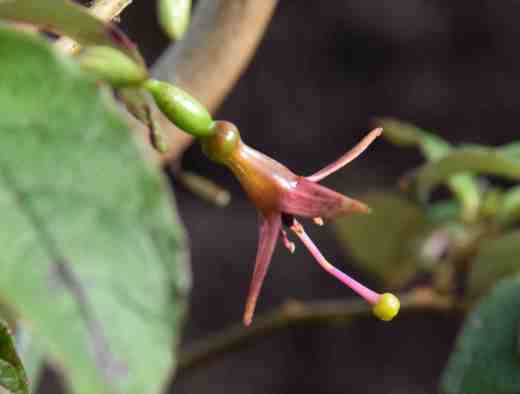 I won’t even think about rating this one since I am not sure if it is what it purports to be and it has almost zero garden value – but I am amused by it.