You are here: Home » The hazel garden; continued

Gardening can be instant, if you are filling pots with bedding, but it can also involve patience and planning. This is especially so if you are watching the cents! So my newest bit of the garden to get attention is a long-term project. The sarcococcas were grown from seed – well spontaneous seedlings that were dug up and potted at seedling stage almost three years ago. I have planted them quite close, much closer than if I had had to buy them, but then I would not have been able to justify 40 or so sarcococcas at 8 euro or so a pop. Between the ten hazelnut trees, which were bought bare-root which is cheaper than potted (and better too) I am putting Cornus sericea ‘Flavirimea’. As it happens I am also using it for the hedge down the side of the garden where purple beech has failed a second time. I know that you should always try a plant three times before you give up but not in the same place! And I am not prepared to spend another large sum on plants that will almost certainly die – and it is cruel.

Cornus can be bought, and I only need eight plants for this part of the garden but they are so easy to root from hardwood cuttings that I am not buying them either, especially as I have a source of cutting material. Many shrubs can be grown from hardwood cuttings, including ribes, forsythia and philadelphus and all are prepared the same way. They are best taken now, as the leaves drop. Stems should be of this season’s growth and as thick as possible. The cuttings need to be 30cm long or more and trimmed just below a node and then just above at the top. I also ‘wounded’ the cuttings, scraping off the bark on a small section at the base. This will assist rooting.

In theory they should then be pushed into the soil, in a nursery bed or where they are to grow. Adding some compost or grit to the soil will help and they are pushed in so that at least half their length is in the soil. I have put mine, where they are to grow and have put two cuttings per station. If both sprout into leaf in spring I may remove the second, though it won’t hurt if I leave both. The soil here has been dug but looks awful – it is a bit rough. But cornus are easy to root and I am hopeful they will be OK. 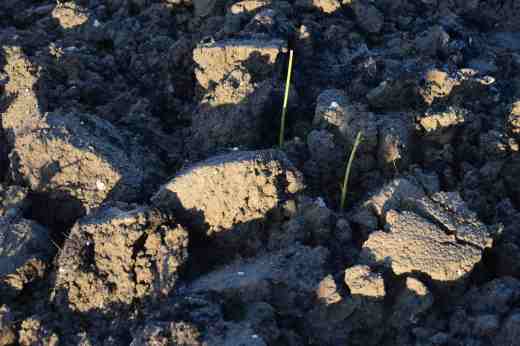 So now the shape is starting to come. I have marked out an inner bed and circular path, which will have to be done by spring. I have planted lots of daffs here over the weekend, in front of the hazels and cornus. I have chosen rather small and plain-looking daffs: ‘Roundita’, ‘Say Cheese’ and the Tenby daffodil (subsp. obvallaris) in yellow and the diminutive ‘W. P. Milner’ in cream. The idea is to give a natural-looking effect in front of and below the hazels. I confess that I still have more daffs to plant, despite also planting several hundred more in the lawns, which is now my priority. In spring the hostas, which were bought bare root and have been in pots for a season, will be planted here where they will get, in time, shade and some shelter if all goes well.