You are here: Home » Seven flowers – or is it six. The joy of heptacodium

Moving house is supposed to be the most stressful thing you can do. I can’t disagree with that, though I think that in addition to the financial and disruptive issues, loss of friendships and familiar routines all play their part. For gardeners there is the additional loss of plants, especially if, as good gardeners tend to do, plants are acquired as gifts or are memories of special places.

I suppose it is for that reason that so many gardeners want to take plants with them when they move. But plants cannot be picked up and put in boxes, left till the mood fancies to pay them attention.

I have answered innumerable questions, over the years, about lifting and taking plants when moving and usually I answer that, unless the plant is in a pot, it is best left where it is. If the shrub has been there years and you are moving in July you are just condemning the plant to a quick death by digging it up. If you are able to plan beforehand and pot it in winter for a summer move then the situation is more hopeful. I dug up a few peonies myself, though my attention was mostly directed to my fan palm that although potted, had broken the pot and rooted into the soil below, but I have mentioned that in a previous post.

So most of the plants that I had put in the garden over the preceding 15 or so years had to be left behind. These included a twin plant of Trachycarpus palms that I rescued. A friend said that they were in a neighbouring garden and were going to be cut down. Already about 2m high, we managed to dig them out and he and I shared the spoils, he taking a single tree and me a pair that were so close they grew as one. My palm (s) thrived and soon became the focal point of the front garden and were 4m high when I left them to new keepers.

Another plant I miss at this time of year is Heptacodium miconioides. I do not keep notes, which is a bad strategy for a gardener. I am creating spreadsheets of new plants in the garden here but it won’t last and I won’t keep them up to date so I won’t kid myself I have changed. But I am fairly sure I bought this, along with a haul of other rarities from Bob Brown at Cotswold Garden Flowers. How I managed to buy something so sensible when surrounded by a feast of treats I cannot fathom because I know it was small and just leaves when I bought it. Sometimes a leap of faith like this pays off and it turned out that my heptacodium brought me joy throughout every year.

This is a fairly new plant to cultivation. Unlike most ‘new’ plants which are variations on a theme, based on plants that were introduced a century ago, this one was not introduced to general cultivation until 1980.

However, it is not as simple as that. It was discovered in Hubei province by ‘Chinese’ Wilson in 1907 while he was collecting for the Arnold Arboretum in Boston. Although the plant was not introduced into general cultivation he must have sent back viable seeds because it was discovered that it was growing there in 1980 when the plant was collected again and it is from that expedition that the plants we now grow are derived. Or is it?

Things are not that simple. Though generally regarded as a monotypic genus – with but one species, in the honeysuckle family – Caprifoliaceae –

‘Then, in 1955, the late H. K. Airy Shaw of Kew described a second species – H. jasminoides – based not on a new discovery but on a hitherto unidentified specimen in the Kew Herbarium, which had been collected many years earlier in Chekiang province. Subsequently this species was rediscovered in the type-locality by Chinese botanists and a plant transferred to the Hangzhou Botanic Garden in the same province. Seed was collected from this specimen in 1980 by the Sino-American expedition to central China and plants were raised at the Arnold Arboretum and the United States National Arboretum. These have been propagated by cuttings and have also produced good seed, with the result that by 1986 H. jasminoides was already well established in cultivation and about to be distributed to private gardens.’

So, if you are like me, totally confused I would reflect that we don’t know how these two species differ and I have been blithely content with a single species. It is a great plant whatever it is.

It is a perfectly hardy, large shrub. Bushy from the start, it is the kind of shrub that can be cleaned of lower stems as it grows to make a beautiful, multi-stemmed tree and it will grow to about 5m high and wide.

I am sure it will not be long before an aberrant shoot appears somewhere with variegated leaves or short internodes that make it possible for confinement in a patio pot but for now, thankfully, it is a wild tiger of a plant, not a declawed pussy.

It has many distinctive features. In fact it is impossible to confuse it with any other shrub.  Along the stems are pairs of elegant, long leaves that curl upwards along their margins but downwards along their length. They are deep green above, lighter below, and contrast with the gingery stems. It makes a distinctive foliage plant all summer. This would not be quite enough reason to get excited about it, even for me, so thankfully, in late summer, it produces flowers. These are carried in large heads, each made of clusters of seven blooms, at the ends of the current growth. There is some debate on how many flowers there actually are, the terminal one, subtended by two pairs of three, not being a flower at all but looking like a bud. I do not have a plant to check right now – you would have thought that botanists would be able to count to seven!

Without reference material I am inclined to believe there are seven. After all the Chinese name for the plant translates as ‘seven sons flower’ or ‘flower with seven sons’. Heptacodium means ‘seven poppy heads’ and not ‘seven bells’ which it would be if it were heptacodon. Miconioides means ‘resembling miconia’ an unrelated plant but in the Melastomataceae which are known for the deep veins in the leaves, so I can understand the connection.

The flowers are not huge, but their numbers make a valuable contribution so late in the season and they are fragrant. It is not just gardeners that appreciate these flowers because butterflies will flutter by buddleias to get to them.

But that is not the end of the tricks heptacodium has up its sleeve. As the flowers fade and the nights get longer the sepals, that began green and small, enlarge and turn rich red so that the whole plant has a different look in October. 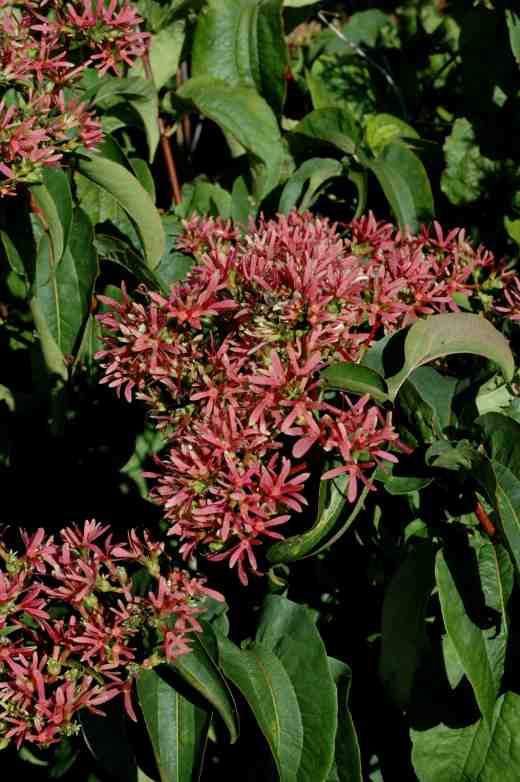 I like the way that neither display has an artificial, exaggerated look like a Japanese azalea, but is still striking enough to be truly garden-worthy.

And it doen’t end there. Though leaf drop is nothing exceptional, with some yellow autumnal colour, it reveals the bones of the plant; a tangle of branches with attractive, peeling, pale brown bark. OK, it is no Acer griseum but it is better than a lot of plants, and just as good as a deutzia, often applauded for their bark, mainly, I think, because there is not much else to say about those one-hit wonders.

So I need to get another. I am sure it will do better here than my clerodendron, which has struggled this year and I am sure will not produce its fragrant flowers and turquoise berries in my short growing season. I miss it and want to add it to the garden.

7 Comments on “Seven flowers – or is it six. The joy of heptacodium”

Plant of the week
New plants
My garden, New plants
Sweetgum and Pines