Everyone likes sunflowers, well the blooms, at least. But annual sunflowers (Helianthus annuus) have a big flaw in that they don’t flower for long and the plants are coarse, at best. Plant breeders have done their best to make Eliza Doolittle into a lady but, lovely though her smile is, her basic habit and vulgar deportment cannot help to give the game away.

This year the T&M-bred, sterile, ‘Sunbelievable’s went a long way to making sunflowers good garden plants with, for the first time, a plant suitable for a border or a patio pot. Attractive flowers, a really well branched habit and a very long flowering season have been promised and claimed before but here we are, at long last, with a sunflower that is attractive all round.

Of course H. annuus is not the only sunflower and there are lots of perennial kinds. The best-loved of all perennial helianthus, H. tuberosus, the Jerusalem artichoke is grown for the tubers that are dug up in autumn and the flowers are elegant yellow sunflowers. Globe artichokes are European in origin and Jerusalem artichokes are American and the ‘Jerusalem’ bit comes from ‘girasole’ which means sunflower in Italian.

Jerusalem artichokes are famous for causing flatulence. This is because of the oligosaccharide sugars they contain. It is a great shame because I enjoy their taste and they are stupidly easy to grow. If you continue to eat them your gut flora adapts so they are apparently less embarrassing.

I suspect that most helianthus are, in some part, edible and seed packets now often proclaim that the flower buds of common sunflowers are edible – I wonder if anyone has tried?

But back to what I wanted to mention some paragraphs ago. Helianthus ‘Lemon Queen’, a plant that is grown solely for ornamental purposes. This is an old, traditional sort of herbaceous plant. It is tall, bulky and vigorous, quickly forming large clumps. It is hardy, not fussy about soil and needs division every few years to maintain vigour. It will usually reach about 1.5m in height but if replanted into fresh soil, with a spring in its step it will easily reach 2m, then becoming more restrained as the competition of the many shoots cause the stems to be less lofty.

It is supposed to be a hybrid of H. pauciflorus var. subrhomboideus and H. tuberosus and this hybrid should be called H. x laetiflorus. I have seen it called H. microcephalus and small wood sunflower. I think just ‘Lemon Queen’ is best! 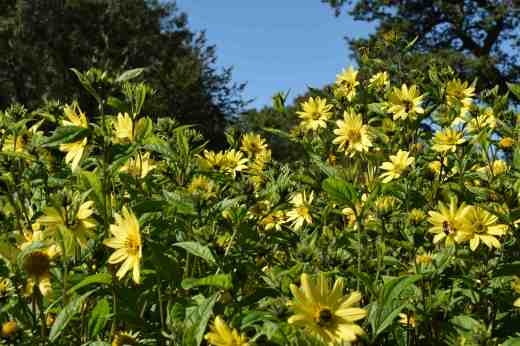 The stems are strong and rarely need staking and then, from early September onwards, a mass of pale yellow flowers open. This is a serious border plant and although it is often recommended for cutting, it has one serious problem. The stems branch near the top and as each flower opens and fades, new buds develop from sideshoots lower on the stem. It means that if you cut a stem it will always have far more closed buds and dead flowers than open blooms. A lot of cutting away and housekeeping means you can get a decent bunch but it is not ideal. But for the garden it is fine. If you do intend cutting stems for flowers later I think this is a serious contender for the ‘Chelsea chop’ – taking out the growth tips in late May so the plant branches from much lower.

I like the plant for its simplicity and ease. It also reminds me of my grandparents’ garden where a helianthus (not sure which) filled dusty, urban flower beds, providing cover for ‘Toddy’ the tortoise and was always in bloom when we visited for August Bank Holiday.

The lower half of the plant does not carry flowers so this is a plant for the back of the border. Typical companions are late-flowering asters, chrysanthemums and dahlias although the ubiquitous Verbena bonariensis would work and billowing miscanthus contrast nicely with the rather blocky look of the helianthus.

Of course, being a tall plant, garden centres don’t stock this, or other tall helianthus such as ‘Monarch’ * so you will have to go to a specialist. This is what I would call my sane choice among helianthus. A less sensible plant is H. salicifolius which I had many moons ago. I admired it for the long narrow leaves that hang from the stems reminding me of the ‘trees’ I used to make as a child from rolled-up newspaper that was torn half-way down its length and then extended as far as one dare before it collapsed. The flowers come very late and they are small, bright gold and on stems rather too short so it gives a congested look quite out of place on a plant that hurls its long stems, up to 3m in length, in all directions. Unkempt is a kind description. But I loved it, until surrounding shrubs greedily filled the ground and the wandering underground parts of the helianthus could not compete and one year it was gone. It is sad when you lose a plant but the grief is shortlived when it provides room for other flings.

*’Monarch’ was planted in the garden last year and I am happy to say that it has survived winter well. What is not so good is that it has sprung up more than a metre away from where I planted it! ‘Lemon Queen’ is clump-forming and not so badly behaved.