You are here: Home » A final resting place – Chamaerops humilis

Some things happen slowly. It was exactly a year ago that we hired a mini-digger and excavated the trenches to bring water from the well to the house and to move the cable from the house to where ESB wanted to put the pole. As it happens, ESB then changed their mind again but we did not have to move the cable again. And it took some time to get the base for the shed that would hold the water filters but this spring we finally got the water sorted. But refilling the trench, which has to be by hand – well shovel – has taken a lot longer and it is still not filled completely and there are mounds of soil everywhere. Some of these mounds will become raised beds and there will have to be some barrowing to complete everything, but as ever, the house comes first.

But every rule has to be broken and this weekend my European fan palm (Chamaerops humilis) finally settled into its new home. I must have had this plant for at least 20 years. It was in a 2litre pot when I bought it and it was in a large terracotta pot for the greater part of its life. Eventually the roots cracked the pot and it rooted into the soil below. In the spring of 2016 I managed to repot it into a large black plastic pot and it was in this when it made the journey in the removal van that June, to Ireland, much to the horror of the removal men – it was big and very spiny! And in that pot it has stayed, until last week when I borrowed a van to transport it to the house. And at the weekend it got closer to its final resting place. 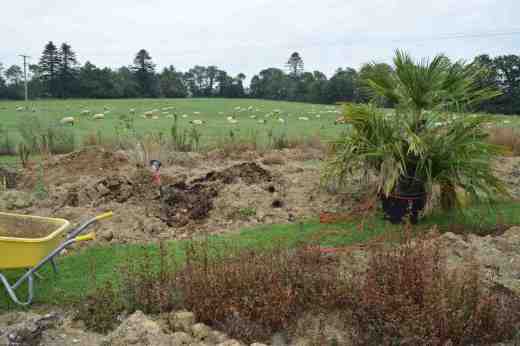 It is a seriously big brute now, despite its specific name meaning small! As well as the main stem it has the many smaller offsets at the base that make this fan palm easy to recognise. It also makes it difficult to handle. Each leaf stalk is lined with vicious thorns and these point towards the outside of the plant – grab it correctly and you can escape largely unscathed but inadvertently thrust your hand in and it will draw blood – lots of it.

It is too heavy to lift, except for very small distances, so we tied a rope round the pot and dragged it to near the prepared planting place. This is one of the hardiest palms but it will not tolerate wet soil so I have planted it on a bank so that the base of its rootball will be at soil level in the hope that it will have perfect drainage. The soil is pretty awful, especially since a lot of it is excavated from a metre down for the water and electricity utilities but I added compost to try to help matters.

Once the site was prepared we dragged it along the soil, lifted it onto the bank, pulled off the pot and let it drop into the hole. After back-filling the hole and levelling the soil roughly all was done. The next job was to pop in the much smaller Butia capitata that has been waiting for freedom too. How long it will be before I fill in the trenches and make the raised beds, I have no idea. Let’s hope it is not another year! 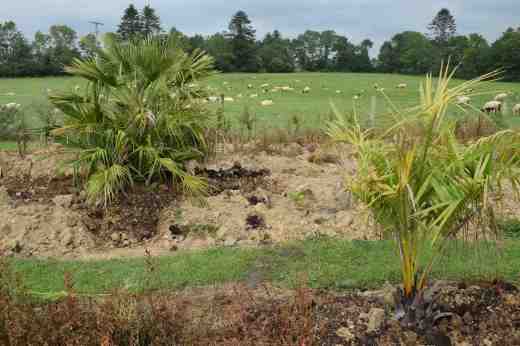 PS. I am hoping for some free lamb chops from the farmer since the sheep have now been put in the field and have been fattening themselves on my hedge.