You are here: Home » Nuphar lutea

Having hinted at this plant the other day I thought I would give it a proper mention. Nuphar lutea is, according to who you believe, either a widespread aquatic plant from Europe and parts of Asia or from the whole of the Northern Hemisphere including the coldest parts of Canada (well not the coldest bits if that means the water never thaws!). A sensible compromise is that this is a rather variable species with several regional subspecies. It is certainly very distinct and easy to recognise with its small, bright yellow flowers. It is not much grown in garden ponds because it is very vigorous and spreads by creeping rhizomes but also self seeds effectively. It has lots of leaves and the flowers are small by comparison with the size of the plant so it has little to commend it, aesthetically.

But it is an interesting plant nonetheless. Unlike waterlilies proper (Nymphaea) to which it is related, it not only has large floating leaves but submerged leaves that are structurally similar but give a ‘lettucey’ look in the water. This allows the plant to grow in flowing water where nymphaeas would not survive and hence, although it likes slowly moving water rather than a torrent, it will grow in canals and water courses with a current, not just in lakes. It also grows and flowers in poorer light than nymphaeas.

Another interesting feature is that the flowers, which are only about 8cm across, but intricately formed, push up out of the water when they open but the pedicels continue to keep the flower above the water surface when the flowers drop, exposing the ovary and the ‘brandy bottle’ seed pod as it develops. Only when it is quite large does the seed pod submerge. The plant dies back in winter and will grow in water as deep as 1m (some references say up to 3m which seems a bit extreme). 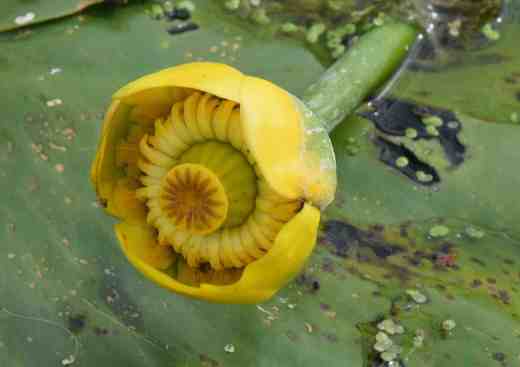 You can see the seed pod below.

Like waterlilies and magnolias, nuphar is considered a primitive plant because there is little differentiation between the appearance of the floral parts. The flowers have 4-6 large golden sepals and about 15 small petals that are hardly seen once the stamens start to curl from around the ovary to lay against the sepals. The whole flower is very attractive in a rather artificial way with the pepper-pot stigmatic surfaces, reminiscent of a poppy.

Common names include spatterdock and brandybottle because of the shape of the fruit and the smell of the flowers which smell of alcohol.