You are here: Home » Priest’s pintle makes a comeback

I try not to repeat myself too much on here but although some people find the blog pages by searching browsers so the topics are far from topical, I try to make each post relevant to the season. And so, despite mentioning the subject of today’s post before, I think it is an interesting enough plant to merit the repetition – and I hope you do too! 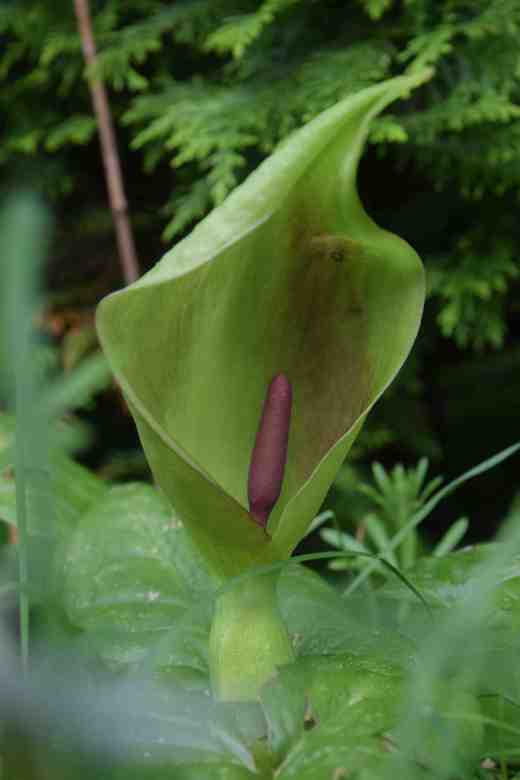 Yes, it is good old lords and ladies, cuckoo pint, jack in the pulpit or one of a dozen or so other names but less confusingly called Arum maculatum. This plant is native to the UK and Ireland and is not likely to be confused with any other plant apart from the introduced Arum italicum which has similar flowers but the leaves are marked with white veins. Both have lustrous, arrow head-shaped leaves that emerge in autumn and distinctive flowers in April/May. The leaves die down soon after but the flower stems remain and develop scarlet berries that are popular with fruit-eating birds.

The flowers are very unusual but are typical of the great aroid family (Araceae). What we would normally call a flower is actually an inflorescence or collection of flowers and they are surrounded by a large, modified leaf called a spathe. There are 107 genera and 3700 species in the family and the ‘flower’ shape, though often modified, is recognisable in most. Take an anthurium, the popular houseplant in northern Europe, which has a flat spathe, often in bright red. The family embraces the smallest of all flowers, in duckweeds (lemna) and the biggest inflorescence in the Sumatran Amorphophallus titanum which always causes excited news reports when its huge tuber (which can weigh 50kg) decides to produce the monstrous ‘flower’ which can reach 3m high and smells of rotten flesh. By the way, the name translates as the ‘giant misshapen penis’.

But getting back to our native plant, which only reaches about 25cm high, Arum maculatum usually has spotted leaves but not always. The spathe is usually green but can be tinted with purple. The spadix can be yellow or purple and the two colours may have given rise to the common name of lords and ladies but most of the other names are much ruder and refer to what you must have noticed unless you have a very pure mind – that the spadix has a rather penile shape or at least attitude!

Perhaps the most common is cuckoo pint. Pint (as in mint not pint) is short for pintle or penis and the plant flowers when the cuckoo arrives. Cuckoos were always associated with fertility as were robins so it is also called wake robin. Jack in the pulpit and priest’s pintle have a similar origin. In Ireland it was known as Cluas an gahbhair (or goat’s ear) with reference to the shape of the spathe – the Irish are obviously much less bawdy than the English! In fact so obsessed were the English with the shape of the flowers that it was thought that all girls had to do was touch the flowers and they would fall pregnant.

So, back to the flowers. When the ‘flower’ is open the top of the spathe is unfurled but the lower part is closed with a distinct waist. The spadix in the centre pokes through the gap and the upper, visible part emits a faint sweetish scent and also generates heat. It is a feature of many Araceae that they are thermogenic and produce heat which may help distribute the scent. It may also attract pollinators since many temperate species bloom in early spring and the ‘flowers’ provide a refuge from the weather.

Here are two ‘flowers’. The upper one, with the spathe more open, has been open two days and is older. The lower one has just opened – day one.

When the lower part of the spathe is cut open the amazing structure can be seen and the huge effort the plant goes to to avoid self pollination (and maintain genetic diversity) can be explained. Starting at the base (on the right below) there are the female flowers that are clustered around the stem and have no petals. Just above those, after a slight gap, are the male flowers which have no petals and are just stamens. And above that, after a small gap, is a series of downward facing hairs.

When the flower first open, on day one, the female flowers are receptive but the stamens have not opened. The inflorescence is functionally female. Midges are attracted to the smell and warmth of the spadix and crawl down it and past the hairs. What they don’t realise is that they are trapped by those hairs and they have to spend the day and night in their cosy dungeon. And in doing so, they deposit any pollen they may be carrying, onto the stigmas on the female flowers (you can see they are fluffy in the photo below – just).

The next day the female flowers are no longer receptive (the stigmas brown)  but now the stamens open (below) and shower the midges with pollen. And now those hairs start to wither and the midges are set free. And, not being very bright – their brains must be tiny – they fly straight to the next ‘flower’ deposit the pollen on the female flowers and repeat the whole process!