You are here: Home » Poinsettia resurrection

I have been holding off mentioning Christmas for fear of upsetting anyone but, having been super-organised I went to the Dundrum shopping centre (Ireland’s largest) on Thursday night to Christmas shop and had an awful time since the whole population of Dublin as well as Co Wicklow and Meath also decided to go. So, no holds barred now – I will mention the unmentionable: poinsettia, poinsettia, poinsettia. POINSETTIA!

I usually consider poinsettias to be disposable and I never really worry when the leaves drop off in mid January. I don’t really want to see them after Easter and they are so cheap to buy that I don’t care if they die. And besides, I always want a white one or a pink one or a glittery one the next year so I buy one of those. And when I look at it on December 19th I decide that pretty though the pink ones are I really need a red one so I rush out and buy a second.

But this one survived. Maybe it was because it was a locally grown plant, and it was certainly in a large pot compared to the imported ones. So it kept its leaves and in July looked a bit overgrown but was still healthy.

It was a bit late in the season really but it had to be pruned. It should have been cut back in April really to give it time to regrow.

I cut it back hard. I would have repotted it under normal circumstances but the pot was large enough anyway. I added some controlled release fertiliser but then just kept it moist and growing. It has been kept in the propagating area which had some bottom heat for the cuttings that have been rooting but no other special treatment, except……

So because this plant has been in a greenhouse where there has been only natural daylight, it started to make bracts in October and this is how it looks this week. I am mildly proud. 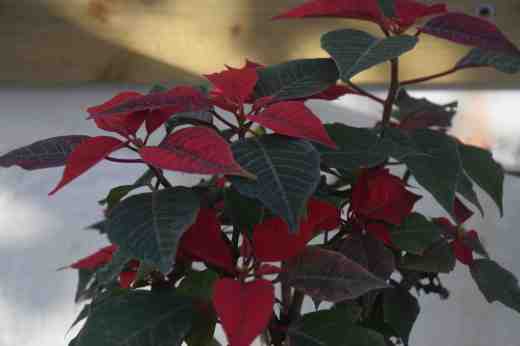 There’s life in the old thing yet.

poinsettia. how to make poinsettias flower