You are here: Home » Just when you thought it was all over: toad lilies

Although we are not quite as desperate for colour in the garden now as we will be in a couple of months time, any flowers are welcome, especially when they are as intricate and special as tricyrtis, the toad lilies. These Asian perennials are, unaccountably, still in liliaceae: when the family has been split into confusing new families so I hardly know what is what any more, how can so complex a flower still be related to the humble lily? I have no idea. Anyway, if you want a hardy plant that brings the floral season to a dramatic end then these could be for you.

There are many species and even more cultivars and they vary from upright perennials to gracefully arching plants that are best planted on a slope. The largest flowers of the genus tend to be the yellow flowered species and most of these are nodding while the pink and white species tend to have upright flowers. I am not 100% certain of the name of my plants but I suspect, by their hairy leaves and buds and the way the flowers open right along the stems, that it is Tricytis hirta. 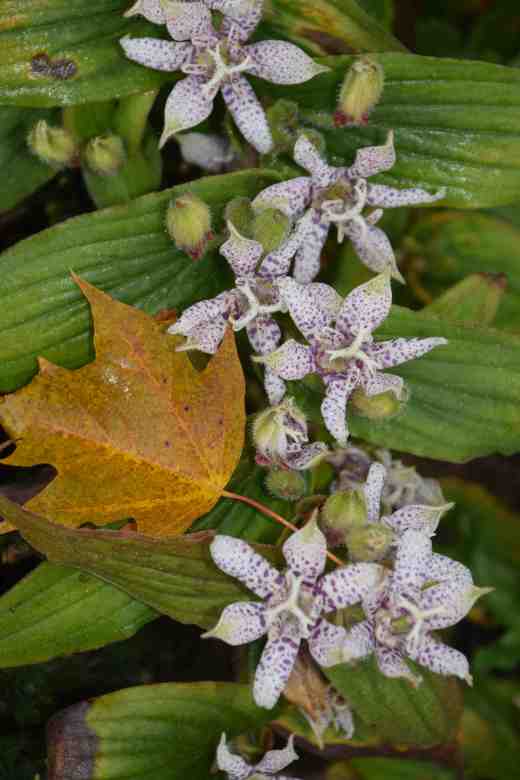 Tricyrtis are named for the three lumps (kyrtos) at the base of the flowers. There are six petals, six stamens and an intricately branched stigma and everything is spotted. It is these spots that give them the name of toad lily.

They were first seen by westerners in 1776 when Carl Thunberg travelled around what is now Tokyo but it would be another 100 years before the first plants reached the west and were cultivated here.

The plants tend to be a bit slow to get started in spring and some have spotty leaves. The leaves are arranged in a ladder-like formation along the stems and are attractive enough, which is just as well since most take a long time to open their flowers. Mine started a few weeks ago but are at their best now but, by now, the leaves are looking a bit scruffy. 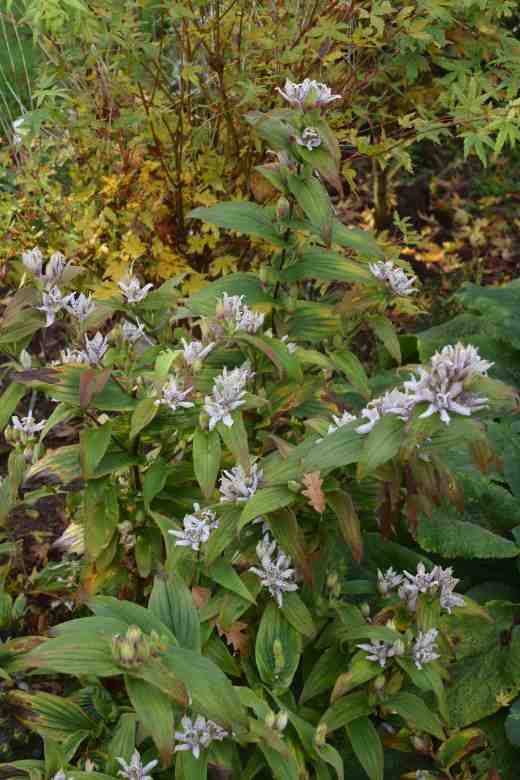 Tricyrtis are not too fussy about soil, well the commonest aren’t, and as long as it is not too dry, sodden or very chalky, they are worth a try. But it pays to give them a good start and you should add lots of organic matter if possible. Avoid full sun unless the soil is constantly moist and a cool, semi shady place is best.

Most make dense clumps and they are not invasive and can be increased by division or by stem cuttings. Simply cut down the plants in winter, give them a tasty mulch and they should get better every year.

Although the flowers are not huge and usually not vividly coloured they are intricately constructed and coloured and they make a decent cut flower too.

5 Comments on “Just when you thought it was all over: toad lilies”