You are here: Home » Pink and blue border update: Chicory

My pink and blue border never quite reached the perfection I wanted this summer. I think it is partly because I lost a bit of confidence when planting and popped in too many plants and complicated what was supposed to be a combination of Nicotiana mutablilis and chicory. The chicory flowered a bit late and the ‘extras’ just spoiled it. But now those interfering plants have mostly given up for the year the two main players are actually at their peak and although the nicotiana are lolling around like guests at a wedding, and the chicory is more like the men at the preceding stag do, I am liking their pairing more each day, especially as, despite recent winds, it is still mild and the flowers keep on coming.

Chicory (Cichorium intybus) is a perennial but I sowed the seeds in spring and treated it as an annual and all the plants flowered this summer, making scruffy rosettes, rather like an overfed dandelion, and quickly sent up tall, much-branched stems that took a while to develop flower buds. But the countless stems produce small clusters of buds along their length and these open sporadically over many months. If they were anything than blue (there are pink and white forms) they would be nothing special, but they are of a wonderful, ethereal blue and now the weather is cooling they seem to have a paler centre that only adds to their charm.

This is the wild form of the chicory that can be cultivated for chicons and for its root to make a coffee substitute. When the plants are pulled up after the first frost I may have a go at that if the roots are a decent size – I think that if you were to grow them for this specifically it would be better to sow in late spring so the plants do not flower the first year so they have a big storage root in winter. I know some people hate chicory ‘coffee’ but I quite like it and once used dandelion roots for the purpose and although it wasn’t a lot like coffee it was very palatable. 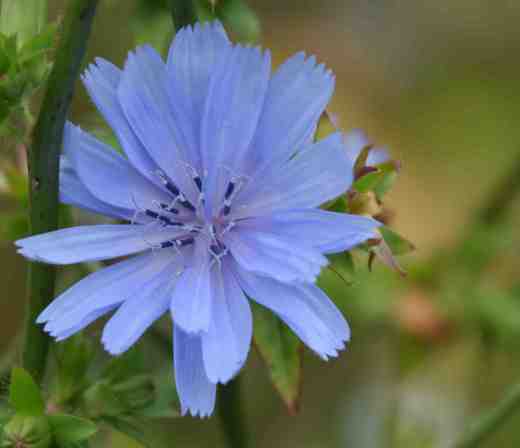