In spring I was lucky enough to be given some tubers of yacon to plant – thanks Michelle. I have grown yacon before but lost the plants several years ago when the growth tubers were frosted. Yacon is not very well known in the UK and Ireland but it is easy to grow and actually very edible for an unusual veg. Before I go on about what I did, and what the plants did, I think a few lines of description are necessary. 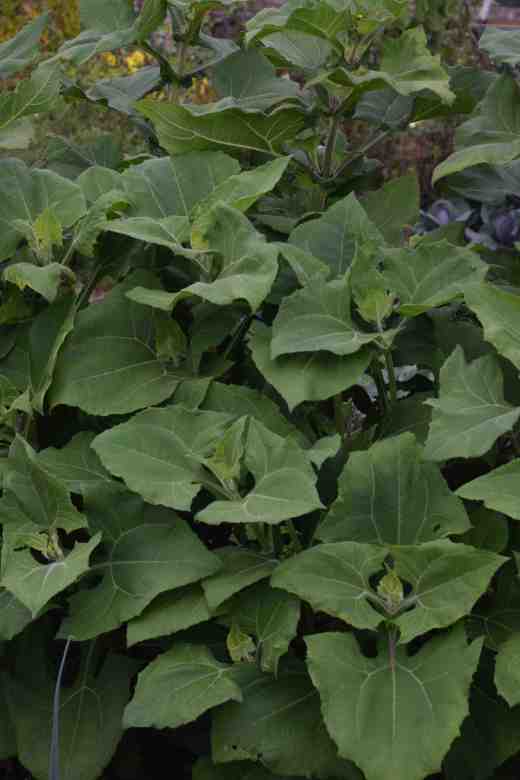 Yacon, (Smallanthus sonchifolius) is a herbaceous perennial from the Andes where it is grown as a vegetable and medicine and has been for a long time. It has upright, almost unbranched stems that are stout and softly hairy. Before I go into the culinary uses, a few words about the plant itself.

Smallanthus is a genus of about 25 species, all from the Americas. The plant is often compared to a Jerusalem artichoke but I prefer to compare it to a dahlia in morphology because while artichokes have stem tubers that have shoots at one end, rather like a potato, yacon has a cluster of tubers that store food, and which we regard as a crop, and at the base of the stems are buds that can be removed and grown on. If you remove the storage tubers alone they will not sprout – just like dahlias.

I think the genus is named after a botanist called Small. These plants were first named Polymnia by a botanist called Small but later changed by ‘Mackenzie’ in 1933 to smallanthus and I assume it was in his honour. What makes a smallanthus a smallanthus is based mostly on the shape of the fruits (achenes) but another common characteristic of the genus are the three main veins in the leaf. Anyway, at the end of summer the flowers of yacon appear. The first flowered here three days ago and although they are not huge (about 5cm across*) they are quite attractive and, if the frosts hold off, there should be quite a show. 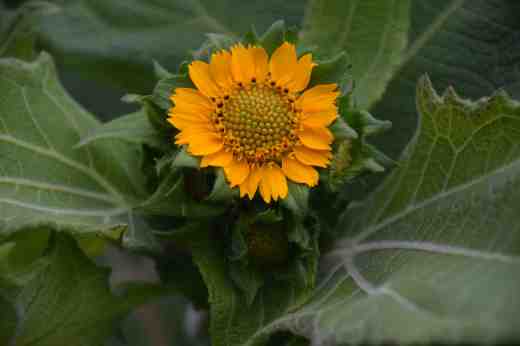 So, by autumn, each plant should have produced a cluster of tubers under the ground. It is best to leave the plants until they are frosted before digging the tubers because it improves the sweetness, but they must be lifted before severe frosts.

So, once you have lifted the tubers, which can weigh up to 1kg but are usually much less, (and there will be up to about a dozen of them per plant, looking a bit like sweet potatoes) you can eat them. They are crisp and sweet and I think they have a texture like water chestnuts. The taste is sweet and a little like apples. It is worth washing the tubers well before peeling and eating them or the dirt will discolour the white flesh as you peel them. You can eat the tubers raw and they are useful as crudites. They can also be stir-fried or you could boil them. The tubers can be eaten as soon as they are dug or they can be stored. Some say that the flavour improves if the tubers are exposed to sunlight but since this is also said about oca and taste is a bit subjective I am not certain about this.

One of the reasons they are attracting a lot of attention is that the sugars in them are fructooligosaccharides which is not digested but the tubers also contain fructose. Because of this the tubers only provide us with about a third of the calories that they actually contain – if that makes sense! But not only does this mean they are a low calorie food but the fructooligosaccharides (FOS – to save my sanity typing) feed the beneficial bacteria in the gut and that is a big health benefit – they are prebiotic. The use of yacon in the diet has been shown, in some studies, to help boost weight loss, but I think the main benefit is as a healthy food. But, like other plants that contain FOS the indigestible sugars and the encouragement of bacteria can cause flatulence, especially when you start to introduce them to your diet. They are also useful as a natural relief to constipation.

I have never seen yacon tubers for sale in shops as food although I have sometimes seen the plants for sale in garden centres (well, once, this year, at a high price). But you may find yacon products, especially yacon syrup for sweetening drinks. Whether it is healthier than sugar is debatable but it can’t be bad. It has to be better to grow your own and the leaves can also be used as a tea which is also prebiotic and also antioxidant rich. 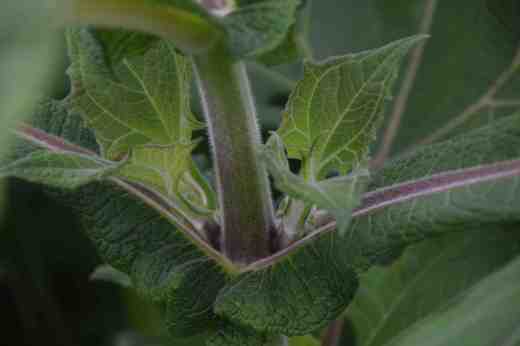 So, I started the plants in spring, cutting the clusters of buds into small clumps and potted them in small pots. I kept them quite dry until they started to grow and in a cool greenhouse. Once frosts were almost over I put them out to harden them off and they were planted about 1m apart, in well cultivated soil in late May. Growth was slow at first because of the cold, dry weather but they then grew quickly and are now mostly 2m high. Each plant has half a dozen strong, upright stems and with their large leaves they are fairly attractive in the veg plot. I have never known any pests of diseases to bother them and the strong stems have been unaffected by the autumn winds that have battered other plants. This really is a no-fuss plant.

The only real problems come in autumn when, after lifting the plants and taken off the edible tubers, you have to keep the shoot tubers at the base of the stems in a cool, but frost-free place for a few months till you start them into growth the following spring. In warmer climates the plants would probably survive outside but not in the UK or Ireland. And the good news is that, unlike Jerusalem artichokes, this will not be invasive or a nuisance.

Of course the real test will be in a few weeks when I dig up the plants and see what sort of crop I have. I can’t wait!

benefits of yacon, fructoologosaccharides, harvesting yacon, how to grow yacon, how to prepare yacon, polymnia, prebiotic yacon, smallanthus sonchifolius, what is yacon, when to lift yacon, yacon