You are here: Home » In the firing line

The other weekend I went exploring. I went for a ride to Laragh, the nearest biking spot, for a coffee and then went across the Poulaphouca reservoir (which is where the River Liffey is dammed) and then west to meet the N81 and headed south towards Baltinglass. I needed to get south and east to get home so when I saw a sign for the Glen of Imall (Glen of Imaal – it seems to be written both ways – Gleann Uí Mháil in Irish), and that seemed to be east, I thought I would head for that. The road soon appeared to be far from a main route and when the signed town of Knockanarrigan appeared to have more letters in its name than inhabitants I started to feel less confident that the route would take me over the mountains to home! The road surface got less good too and the landscape changed from green and verdant to heath and woodland, much of which was cleared. And then the road seemed to come to an end and I pulled up at a large sign that warned me of imminent death! I had ridden into an artillery range.

If you have never heard of the Glen of Imall (and I hadn’t before) you may be interested to know that it is perhaps better known for the small terrier that is unique to the area. It apparently originated with French and German dogs that were brought to the area in the time of Elizabeth l. This small, but stout dog was bred for hunting vermin and it was selected for its non-vocal characteristics. It is among the rarest breeds and is unusual for its strange habit of sitting up on its back legs. Cute eh? (photos below from the web) 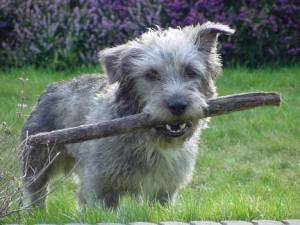 4 Comments on “In the firing line”