You are here: Home » Plant partners for spring

I have always liked sorbarias but they tend to be big and brutish. ‘Sem’ is much smaller and can even be grown in a large pot. I like its pale lime/yellow leaves and the shrimp pink tinge to the new growth. In fact it just occurred to me that the foliage is the same colour as Acer pseudoplatanus ‘Brilliantissimum’ a plant that I always say I dislike – not sure what happened there! ‘Sem’ is vigorous and it is starting to sucker in its second year which may be problematic in the future, but for now I can accept this and I think it makes a good companion to the bold x Heucherella ‘Brass Lantern’. This is one of Dan Heim’s best creations, in my opinion, because it is attractive and a good grower too. I have now grown it in dry conditions in the east Midlands in the UK and in this wet, heavy soil in Ireland and it has done well in both. I nearly always grow my heucheras and x Heucherellas (hybrids between heucheras and tiarellas) in pots for the first season so they get a bit bigger before being set free in the open garden. This one has gorgeous, lobed leaves in brown and mahogany shades and attractive, fluffy white flowers. 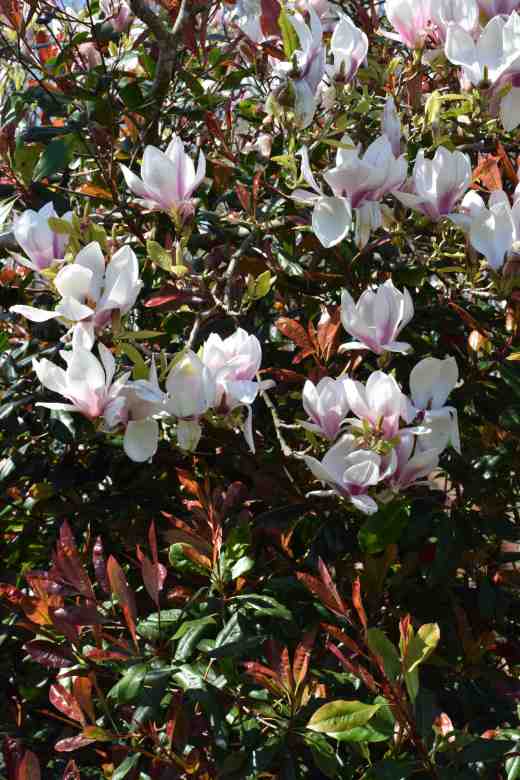 This is a combination for a bigger garden but the red new growth of the photinia looks good against the magnolia flowers and photinias are less easily damaged by late spring frosts than the more traditional pieris.

On a smaller scale again, the bright blue flowers of Corydalis flexuosa is a striking contrast to the yellow foliage of this seed-raised aquilegia. There will be more on these soon as more open but so far it seems my aquilegias are in a very random range of colours and this one, planted in the yellow border, looks as if it will have pink flowers. I don’t think any of what should be blue aquilegias will have blue flowers.

This was supposed to be a combination of pinkish red hellebores and pink anemones but, as often happens, they didn’t turn out the right colour and came up white. It was a bit disappointing but it probably worked out for the best really because pink flowers would not have shown up.

This weekend I will be at Garden Show Ireland in Antrim. Among the attractions are recordings of Gardeners’ Question Time on Friday. There are more details on my ‘Talks’ page.

2 Comments on “Plant partners for spring”