You are here: Home » The pyramid of bloom

Flushed with the success of my first experiment with mind-your-own-business (myob)(Soleirolia soleirolii)  – see yesterday’s post – I wanted to experiment more with this small, spreading plant. A weed to some and a pretty houseplant to others, it is abundant in the garden here, spreading like an unrolling carpet over undisturbed soil. With spring in mind I decided to use it to line two cones (sorry – not really pyramids) made of chicken wire that I would plant with common muscari to create a tower of blue in April.

The first thing was to make the cones. I cut arough triangle of 2cm chicken wire from a 1m wide roll and then joined the two straight sides and attached it to three 1.2m canes using cable ties.

I then had to plant up the cone and here was the first problem – the cone was about 1m deep and my arms are not that long! But I managed to push some myob into the base and up the side a few cm. I made sure I attached a cane of the cone to an upright so the cone did not wobble around too much while I was planting. I then started planting the muscari (grape hyacinths). I would have liked to plant something special but as this was a last-minute idea I had to use what I could get in quantity so used plain Muscari armeniacum. I pushed the nose of the bulbs into the myob so they were facing outwards. I added more myob and infilled with compost and added more bulbs.

Luckily the myob was lifted off the soil and not the gravel path so had a layer of soil under it so it was easy enough to place the sheets of myob against the sides, push the bulbs into it and fill with compost. I made sure I firmed well as I went. As the cone got wider the job became easier.

In total I planted 300 bulbs per cone. When I got to the top I made sure the compost was well firmed, watered it thoroughly to firm it and sprayed the outside to make sure the myob would recover from the ordeal.

I also made sure the cones were over-filled with myob and compost to allow for settling. They were left in the greenhouse and allowed to establish for three weeks before I attempted to put them in their final positions. Then came the tricky bit. I had to move them from the greenhouse (on a sack barrow) to get them to their urns. I then trimmed the canes so the base of the inverted cone would lay on the compost surface. Then I put a thin wooden plank on the base of the cone, held the narrow end with the other hand and swiftly inverted it onto the compost surface. I pulled out the plank and, voila, I had the cones in place.

The potential problem is that the narrow tip of the cone will dry out so regular watering is essential because myob will not tolerate drying out. But I am hoping that because I have positioned these under hanging baskets, which will need regular watering and will drip, I can keep the cone tips well watered. 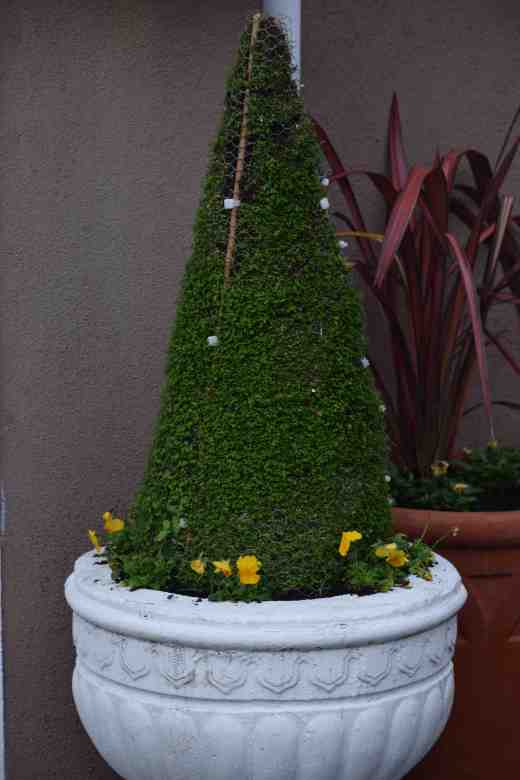 Another potential problem is the cable ties. At the time I only had rather large white ones and black would have been a lot better but, if all goes to plan the myob will soon grow and cover them well before the muscari starts to flower. So although they look a bit spoiled by the cable ties now I hope they will soon look much better.

All I have to do now is wait for spring to see what happens and if I spaced the bulbs properly.

5 Comments on “The pyramid of bloom”