You are here: Home » A spider in the bathroom: brassia

Not all the orchids in my house are moth orchids (see the post the other day) and I have a few others. Although ‘other’ orchids are much less common in garden centres and supermarkets, you can sometimes pick up some interesting plants in mixed trays of plants. Among these are brassias (spider orchids) miltoniopsis (formerly miltonia or pansy orchids) and the hybrids of the two, mostly miltassias. While miltoniopsis have few-flowered stems with large, rounded flowers that appeal to everyone, brassias (below) have rather strange flowers in cream and brown and miltassias bring brighter colours to their hybrids with showy lower petals (lips) and great vigour. 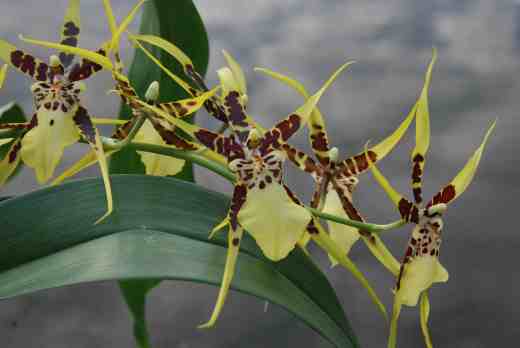 But despite the slightly sombre colouring of brassias they are really attractive plants and grow well in the home. They need a bit more humidity than moth orchids (phalaenopsis) and if they are allowed to dry out at the roots they will show you their displeasure, a month later, by producing concertinaed leaves. They have large pseudobulbs and you want the plants to produce new ones each year as they grow and make large clumps because only then will you get more flowers. They need a minimum temp of about 18c all year, though cooler in winter, every now and then, will do no harm as long as it doesn’t drop below 10c. But these are in the group of orchids often called ‘intermediate’ which means they do not need really high temperatures and they also benefit from a night time drop in temperature, something that is usually found in centrally heated homes.

Because moth orchids are so ubiquitous and are what most people judge all orchids by, these, and other orchids can be a bit disappointing because they will not be in flower for months on end. I find that a flower stem will last about a month and then you have to wait a year before more blooms are produced. What you do get with these, and miltoniopsis and many of the group, is fragrance. I always find the fragrance of these orchids, along with the green, brown and purple zygopetalums, oddly transient and hard to predict and describe. Usually it is strongest in the morning and I often get a powerful noseful when I draw the curtains, but by midday it is gone. Sometimes it is vanilla, other times spicy and at others just sweet.

When the flowers fade, cut off the flower stem. Keep plants just moist and feed in the growing season but, like most orchids, never let the plants sit in water. Older leaves will drop off the pseudobulbs as the plants age and, in theory, you should cut up the clumps after two years and discard the old pseudobulbs. If you get to that stage make sure you repot in an orchid compost. My plant is in an east-facing window and seems to like it there, having just produced this years’ flowers. With a little care, these attractive orchids are longlived and rewarding.