When I first heard about the new ‘Redlove’ apples, it must be five or six years ago now, I was excited. Though there have been red-fleshed apples before, such as ‘Bowles’ Crab’ and ‘Bloody Ploughman’, they are not the best apples to eat. ‘Redlove’ apples – there are two commonly available cvs (‘Circe’ and ‘Era’), that vary in ripening time – are sold as the first ‘delicious’ red-fleshed apples. When I first tasted them I was not exactly blown away by the taste. They were sharp and ‘tart’ and I am not sure I would buy them more than once. But the flesh is really pink and extra colour means extra antioxidants means ‘healthier’. In addition, the leaves are dark red and the flowers are deep pink and look really nice.

I don’t know what is happening this year but, despite the sun and warmth, lots of fruit is not overly sweet. The blackberries would dissolve tooth enamel and most of the apples are chewy and more acid than I would expect. But ‘Redlove’ is almost impossible to eat. The fruit are small, hard and very acid.

But they could always be cooked. So, being positive, I made my favourite cinnamon apple rolls* and used ‘Redlove’ in the recipe and ‘YAY” they worked perfectly. They kept their shape, and their colour and the pieces of apple poking through the dough look like jewels (well cherries). YUM.

Since writing this it occurred to me that I ought to say more about ‘Redlove’ apples. Firstly, ‘Redlove’ is not actually a variety (or more accurately, cultivar) but a ‘brand’. There are several cultivars or ‘versions’ of the redlove apples (including ‘Era’, ‘Circe’ and ‘Calypso’) and the idea was to brand a red apple and have several cultivars, that mature at different times, to supply shops. They were all bred by the Swiss fruit breeder Marcus Kobelt for the Lubera company which has introduced some other novel new fruit. In theory orchards have been planted with these apples but I have not yet seen the fruit for sale in shops.

The red colour is supposed to stop the flesh browning (it seems to work) and the fruits have more antioxidants than most apples. 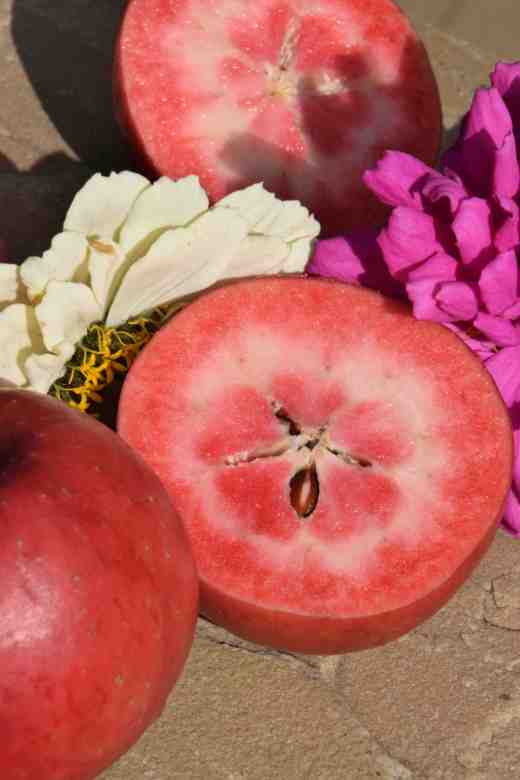 * My recipe, sometimes adapted a bit, is from Sally’s Baking Addiction – a great site with amazing recipes that work – but in the UK you need to convert cups to gms and some recipes cannot be done in the UK and Ireland because some exotic ingredients, such as cinnamon, pumpkin coffee creamer (I kid you not) is only available in the US.