You are here: Home » Another great phlox: ‘Schiaperelli’

There are recurring themes developing on this blog and one of them is my evident love of annual phlox. It seems I am not alone because one of the most viewed posts is about the lovely ‘Moody Blues’. I am being true to my feelings and growing this again this year, but this time in combination with isotoma and white nicotiana – I will show you when they are all a bit bigger.

But now it is time to turn the spotlight on another form of Phlox drummondii, the unfortunately named ‘Schiaperelli’. I say unfortunate only because if you deliberately wanted a plant to sink into obscurity you give it a name that is unpronounceable and hard to spell or remember.

* for evidence of my ignorance in sartorial matters

One of the reasons I like this North American annual is that it is fairly easy to grow and quite quick to flower but then builds throughout summer and usually keeps on blooming till the frost. Sow the seeds in March in gentle heat, transplant them into trays or cell trays and grow on in a frost free place and finally plant out (in the UK and Ireland) in late May where they are to bloom. Slugs and snails are very fond of them so protect the plants when young.

‘Schiaperelli’ is only available from Suttons Seeds ** and is a remarkable vivid cerise. I have not seen much variation in the flower colour and it is striking in the extreme. The plants are low and bushy and I have used them in the open ground but also in containers. 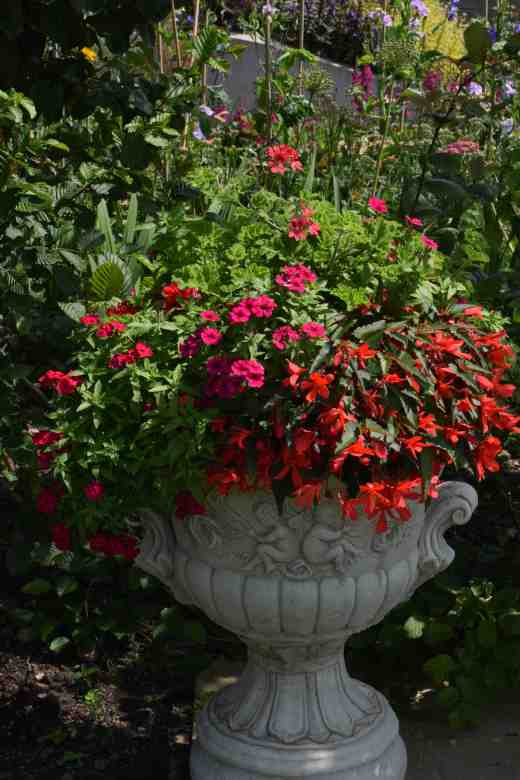 I had originally planned something special for the garden urns but in the end they got planted in a rush with a general red theme with a begonia, scented pelargonium ‘Scarlet Pet’, red diascia and several of these phlox. Although the phlox is a bit on the blue/pink side of the spectrum and you could argue that it clashes a bit I am generally happy with the result because all the plants support each other and none are shown up by the others.

If you need a brilliantly bright, easily grown annual to bring some zing to your garden this is certainly one to try.

* Being the uncultured Anglo-Saxon idiot that I am I had no idea what Schiaperelli was. Then I had a brain wave – Google it!

So – paraphrased from wikipedia:

Elsa Schiaparelli (1890–1973) was an Italian fashion designer. Along with Coco Chanel, her greatest rival, she is regarded as one of the most prominent figures in fashion between the two World Wars. Starting with knitwear, Schiaparelli’s designs were heavily influenced by Surrealists like her collaborators Salvador Dali and Alberto Giacometti. Her clients included the heiress Daisy Fellowes and actress Mae West.

Schiaparelli’s perfumes were noted for their unusual packaging and bottles. Her best-known perfume was “Shocking!” (1936), contained in a bottle in the shape of a woman’s torso. The packaging, was in shocking pink, one of Schiaparelli’s signature colour.

Suddenly it all makes  sense!

4 Comments on “Another great phlox: ‘Schiaperelli’”