You are here: Home » Perennials that only cost a packet

Most seed companies highlight perennials that will flower the first year if sown early enough in spring, often labelling them as first-year-flowering. Many of these are well worth growing, especially if you are just starting a garden and need to fill large areas as cheaply as possible but they should not be ignored by any gardeners. Achilleas are a good choice because they are easy to grow, give great value and I have usually found the plants you get from seed are as good as most named varieties you can buy as plants. In the past I have grown ‘Summer Berries’ and been very pleased with the results. But this year I grew two mixes of the newer ‘Flowerburst’ range: red and lilac. Both these mixes or blends have a wide colour range and I must admit that although I planted some in the rainbow borders, according to whether they were in the pink area or the red and orange, a lot went in a  row in the cutting garden to provide lashings of flowers for bunches.

The seeds were sown in mid February in a heated propagator and the seedlings are quite delicate at first and rather prone to damping off – they need careful watering as they germinate and when they are small. The seed was covered in Perlite and light may be helpful to germination. The seedlings were transplanted into small cells and grown in a cold greenhouse until early April when they had three or four true, ferny leaves and were then put outside. The plants are hardy. It is odd that a plant that is basically a cultivated weed can be so prone to damping off when I actually want it to grow, but I suppose it is naturally a plant of dry and poor soil. The young plants were put in their flowering positions in May and were relieved to be free from their containers and grew amazingly quickly and all are now in bloom – five months after sowing.

The ‘Flowerburst’ range is bred by Sahin (from Denmark)/Takii (the Japanese parent company) and is an F2 hybrid meaning that the seeds you buy are seedlings from an F1 hybrid. As a result, you cannot expect complete uniformity of habit, colour or flower shape or size. As far as I am aware you can only buy ‘Red Shades’ and ‘Lilac Shades’. It is too early to give a complete review of the plants but these are some initial results. Most of the plants have grey, feathery foliage but some are greener and some are quite silvery. So far there has been no sign of powdery mildew, the only reason I sometimes get fed up with achillea in the garden (apart from when they flop over). A few stems have had a touch of blackfly (aphids) but these can be rubbed off and achilleas always seem to attract these pests on their stems. The habit of the plants is quite uniform and nearly all are 60cm high although their stated height is 70cm – they may achieve this in the next season. Their habit is upright and conical. Some have formed one strong, main stem, which is densely branched down to the base while others have produced many separate shoots from near the base. I have been cutting the stems and by taking out the main stems it has encourage the sideshoots to develop. 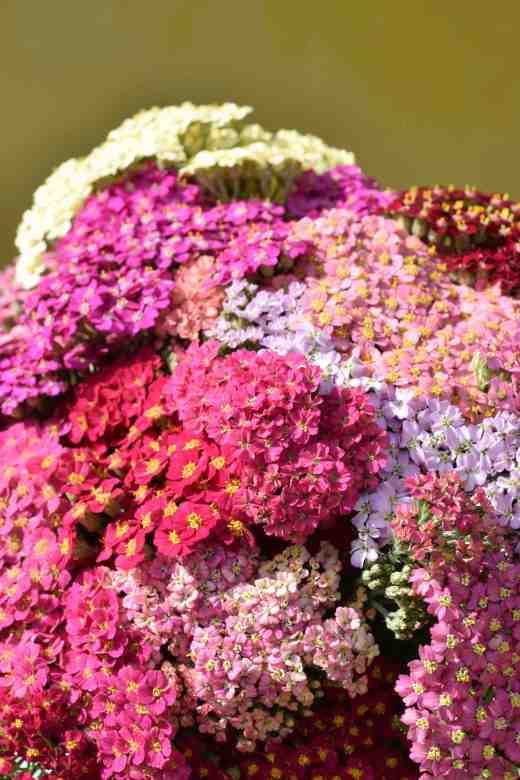 But getting down to the nitty gritty, the flowers. There is not one plant that has unpleasant flowers and every one is beautiful. In both mixes the predominant colours are red or pink (there is not much lilac) but there are pale pinks, salmons and a couple of creamy yellows.

The great thing is that even if I do cull a few of the plants I can split and replant the best plants next spring to propagate them. I think some of these can be planted in with the roses next year to create some nice contrasts.

These achilleas are forms of A. millefolium, the tough lawn weed, and they are easy to grow and the flowerheads can be picked and dried for winter use. It is a good idea to deadhead them as the flowers fade not just to promote more flowers but to prevent selfseeding – achillea can seed into lawns and be a nuisance.

Basically the ‘Flowerburst’ series is absolutely fantastic! I am delighted with the plants, the flowers for cutting and the gentle, pastel and stronger colours they are providing in the garden. The seed is widely available so treat yourself to some. They look great in the cottage garden and also with ornamental grasses in a more minimalist planting.

Oh, and bees and butterflies love them. 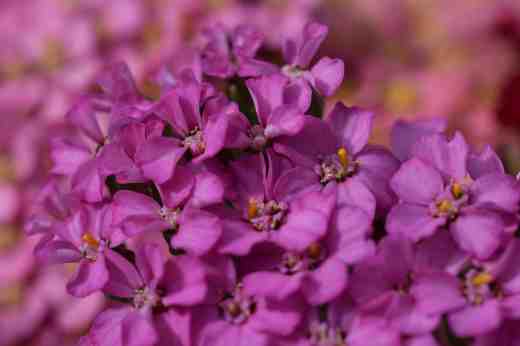 One Comment on “Perennials that only cost a packet”