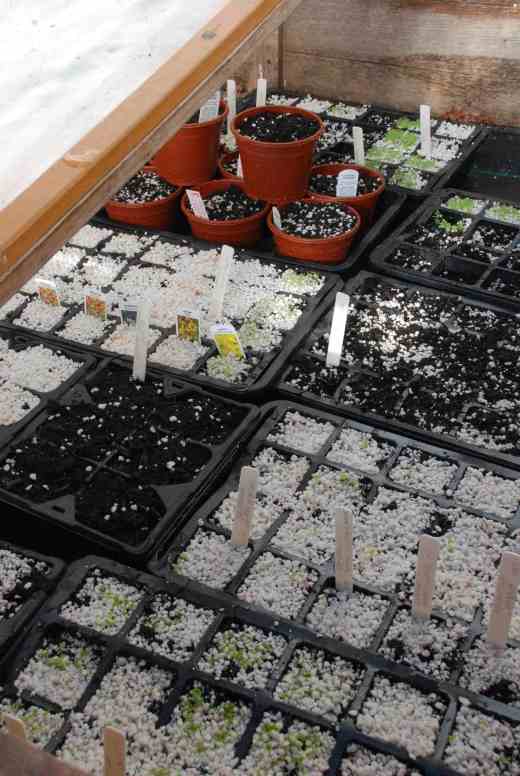 The prop bench packed with seeds. I tend to cover seeds with Perlite to allow light to reach those seeds that need it but keep the seeds moist

Seed-sowing time is almost upon us – in fact I have started already – but February and March are the main sowing months in the greenhouse or house. Outside things are more tricky because seasons vary and it is important to sow when conditions are right (basically warm enough) rather than when the packet says so. Late sowings usually catch up. So why sow in the greenhouse?

The main reason is to give plants a longer growing season, so they do what we expect them to do, and to protect the seeds from pests and diseases. You could sow petunias outside in the garden in May and some of the seeds would grow but most of the (expensive) seeds would fail to mature and they would flower late in the season. We demand more of our petunias to we sow them in a greenhouse, in a protected environment, in February or March, so they flower early and keep on blooming.

But before I go into how to sow I thought I would mention germination times – the time it takes from sowing to when the seedlings appear. Seeds need moisture, oxygen, warmth and, in some cases light, to germinate. I keep a record of all the seed I have sown so I can give the results from last year.

Germination times will vary with the amount of heat they have. You need to keep them warm enough so they grow rather than rot but if you provide too much heat the seeds may germinate but the seedlings will be drawn, especially if the light levels are poor, and you will have spindly seedlings that are prone to fungal diseases and are also tricky to transplant. My propagator is set to about 20C but the temperature can drop a bit below this on cold nights because it is in an unheated greenhouse, and may get warmer by day, especially in later spring.

Last year I sowed my sweet peas in spring (this year’s were sown in October) and they were up within two weeks. I do not soak or chip sweet pea seeds and they never seem the worse for the lack of special treatment.

Of a batch of seeds sown on Feb 4 the longest to germinate were Cleome which took a month to appear. These are worth sowing early because they grow best if the temperature fluctuates and i did take the seeds out of the propagator after two weeks, left them cool for a week and then returned them to the warmth after which they germinated after another week.

Most other seeds took about two weeks to germinate though all the peppers and chillies, sown on Feb 8 took at least a month to germinate, appearing between Feb 27th and March 11. ironically the first to germinate was ‘Naga Norfolk’ but although this made big plants they did not produce any fruit – all the rest did.

I usually sow tomatoes in early March for greenhouse growing but was a bit earlier last year, sowing on Feb 19. All the seedlings appeared between March 3 and 6, about two weeks after sowing.

Probably the quickest to germinate were marigolds (tagetes), basil and cosmos. These were sown on March 8 and all germinated on March 11!

Last year I sowed salad crops in the greenhouse beds, for an early crop, on Jan 28 (I have sown a bit earlier this year). Peashoots and lettuce took three and two weeks but radish, rocket and spinach all appeared within 8 days. The progress of these is shown below, in an unheated greenhouse.

Spinach, sown on Jan 28, a month later, on March 8. early growth was slow but soon speeded up! 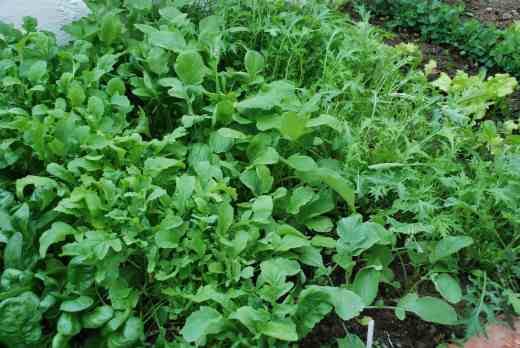 By April 19 the spinach (far left) was ready to pick and the rest of the salads, including the pea shoots (far right) were very productive