You are here: Home » Reaching for the sky – sunflowers

To make some impact and to fill up space in the garden this year (just) I decided to grow some sunflowers. The aim was to create a field of sunflowers ‘a la Provence’ for a bit of a summer spectacle and to provide cut flowers. I grew a range of varieties including some giants surrounded by a row of ‘Vanilla Ice’ and ‘Velvet Queen’. The latter turned out not to be true to name, which was a disappointment but the plants did produce a mass of flowers so all was not lost. ‘Vanilla Ice’ is very different to most others, with smaller, almost graceful, leaves and small flowers. It is Helianthus debilis rather than the common H. annuus but is grown in the same way. The smaller flowers make it good as a cut flower and to integrate in the border where the giant sunflowers are just too coarse.

Anyway, back to the border.

This year the plot was prepared by rotovating it and some pelleted chicken manure was added.

How to grow sunflowers

Sunflowers are easy to grow but people make frequent mistakes so I will cover the principles first before going on to what I did.

1 Do not sow too early. You will not want to plant out your sunflowers till the risk of frost is over* and the seedlings grow fast. That means not sowing, in the house or greenhouse, till May at the earliest. The seedlings will be ready to plant out  month after sowing.

*yes I know they are hardy annuals but plants that have been protected in a greenhouse will not be happy to get frosted.

2 Plant them young. If you let the seedlings grow too long in their seedling pots they will lose their vigour and will flower as small plants and will not grow much once planted out. When the seeds germinate they lift their two seed leaves up on a stout stem and they must be planted out as soon as the first two true leaves appear. Let them develop much of a stem and they will start to be stunted.

3 Give them good light. If they are in poor light they will become stretched and they will flop or need staking when planted out – that’s not a good start in their life.

4 Sow them singly. I sowed two seeds per cell in a six cell tray and if two germinated (they have a high germination rate) I nipped off the weaker seedling as soon as they appeared. You can add these to your salads.

5 Sow in situ. An alternative, that overcomes the slight check to growth through planting out, is to sow them direct where they are to grow. I would still sow two seeds per station. Do not sow outside till late May and sow them 1m apart of you want to grow giants – see below.

6 Give them room. If the sunflowers are close together they will flower but on short plants. This is how they are grown for cut flowers where a single seed will produce a single flower on a relatively thin stem about 1m high. This is the same principle as thinning out any hardy annuals. For this purpose sow your seeds 15cm apart and let them grow for cut flowers. Bear in mind that they will all bloom at the same time so sow a few every few weeks for a supply of flowers over several months.

7 Watch for slugs and snails These will eat your seedlings overnight. The night after planting the seedlings the outer ones, nearest the box hedge, were nibbled by hungry snails waiting for a tasty snack.

8 Feed them. If you want big plants then feed them well – I used chicken pellets and then a mulch of manure. It will not ensure bigger flowers but you will get bigger plants and more flowers. If you want a giant plant then you need to encourage growth rather than flowers so keep them watered and fed.

So, back to my plants.

They were sown in the last week of May.

They were planted out the third week in June.

July 4 – being mulched, about two weeks after planting

They were mulched in the first week of July and grew rapidly. 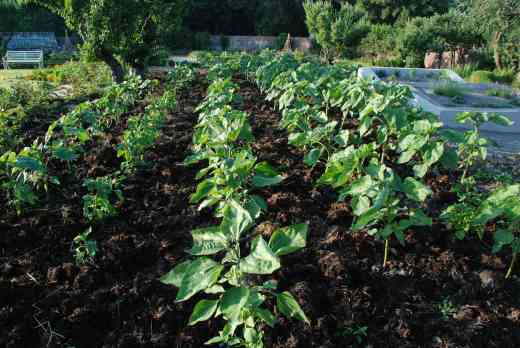 By the end of July the smaller varieties were starting to bloom. 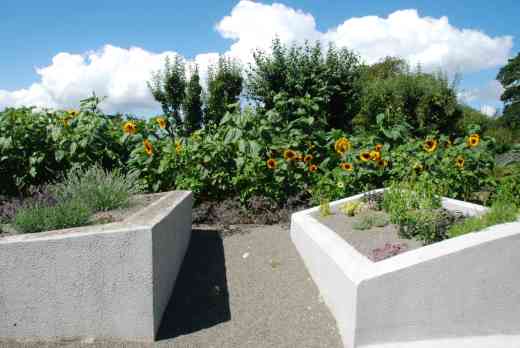 By late August they were all in flower apart from the Giants, which were in bloom in September.

The smaller sunflowers were in full flower on August 26

Finally the giants bloomed in September on stems about 3m high

* To make a face on your sunflower, wait until all the central flowers (remember that a sunflower flower is actually hundreds of flowers) are open and then pull off the flowers to make a face. You can usually just rub your finger over the central area to dislodge them or pick them off for more accuracy.

3 Comments on “Reaching for the sky – sunflowers”